The Lute and the Scars 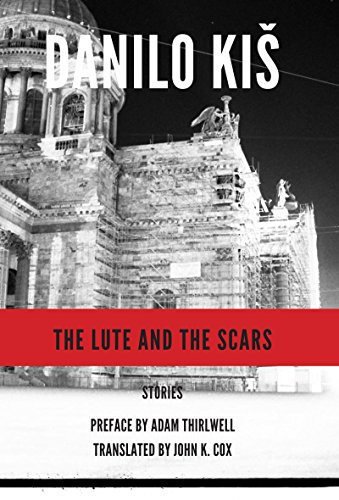 “. . . recommended to Mr. Kiš’ admirers as well as to all readers of Eastern European literature in translation and of short form fiction.”

The six short stories and one even shorter essay that comprise this collection are among the last prose works written by the Yugoslavian writer Danilo Kiš who died of lung cancer in Paris in 1989 and was first introduced to Anglophone readers in the 1970s when his novel-like book of linked short stories A Tomb for Boris Davidovich was included in the series Writers from the Other Europe edited by Philip Roth.

The Lute and the Scars is being published simultaneously with Mr. Kiš’ first works of fiction, two novellas written in 1960, The Attic and Psalm 44 (both reviewed in New York Journal of Books).

The seven works in The Lute and the Scars date from 1980 to 1986. In four of the stories a central character dies, and while the stories are sad they are also touching and entertaining.

Of the six stories, four are written in the third person, as was typical of Mr. Kiš’ fiction in the 1970s, and two are in the first person, which, except for Psalm 44, was his preferred form of narration in the 1960s.

“The Stateless One” is about an actual late Hapsburg novelist of mixed ancestry who has lived in several central European countries, is frank and open about the varied nationalities of his forebears, though he prefers not to mention his one Jewish ancestor. The story is divided into 26 numbered paragraphs in which we follow him from country to country until he finally arrives and then dies in Paris. The story reflects two of Mr. Kiš’ preoccupations, the relationship between a writer and his work, and a skepticism about modern nationalism.

“Jurij Golec” describes the grief following his wife’s death of a Jewish-Polish émigré writer and refugee from Communism in Paris as told in the first person by one of his closest friends. Mr. Golec and his wife met in post-war Poland, and both were survivors of wartime camps, in his case a Nazi death camp and in hers a camp in the Soviet gulag.

This reflects Mr. Kiš’ view that the two totalitarian regimes were equally evil, an equivalence he could not have known would be used by right-wing nationalists in post-Soviet Eastern Europe to rehabilitate the reputations of local wartime collaborators and mass murderers.

Of the stories in this collection this one is the most conversational and has the briskest pace; like other stories in the book it is sad, but its sadness is tempered with levity.

Mr. Kiš at first intended it to be a short work of creative nonfiction (thus the first person narration), but in the end decided to change some of the characters’ names (though not the names of the well known European writers who were the title character’s friends) and turn it into a short story.

The same writing process applies to the book’s title story, which describes life in Belgrade in the 1950s, a time of austerity, and a brief trip to the Soviet Union.

“The Poet” describes the Stalinist period in Yugoslavia from 1945–47 before Marshall Tito declared his country’s neutrality in the Cold War and relaxed somewhat the country’s repressive police state. A poet whose unpublished verse criticizing the regime fell into the wrong hands is jailed and told to rewrite the poem to reflect the opposite point of view.

Every three months his work is reviewed and he is sent back to his jail cell to continue rewriting.

“The Debt” describes Serbian poet and Nobel Prize winner Ivo Andric’s last day and is set in the hospital room where he narrates his will and then dies. The will Mr. Andric narrates is reminiscent of other examples of documentary list making in Mr. Kiš’ oeuvre. It makes the point that even the most accomplished among us owe a debt to those who helped us along the way.

“The Debt” was written in 1986, the same year that Mr. Kiš received his diagnosis of the illness that would take his life in 1989 and can be read as a premonition of its author’s own death.

In the short essay “A and B” Mr. Kiš recalls the most beautiful spot and the worst place he has ever been. “A,” which is subtitled “(the magical place),” describes a scenic spot overlooking the Adriatic; “B,” which is subtitled “(The worst rathole I visited?),” describes the tiny hut in Hungary in which Mr. Kiš and his Serbian Orthodox Christian mother lived during the second world war when his Jewish-Hungarian father was deported to and murdered in Auschwitz.

The book’s final story, “The Marathon Runner and the Race Official,” is a parable about the stifling of individual initiative under a totalitarian regime. In it a marathon runner who half way through a race has pulled ahead of the other runners is told by a race official to stop and rest.

The book includes an insightful preface by Adam Thirlwell, notes from the posthumous 1992 Serbian edition, and additional notes by the translator, John K. Cox.

The Lute and the Scars is recommended to Mr. Kiš’ admirers as well as to all readers of Eastern European literature in translation and of short form fiction.