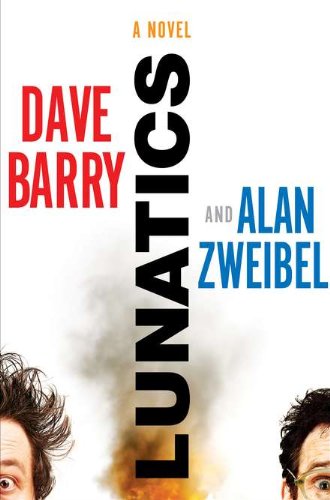 “After his ‘retirement’ from the newspaper in 2005, Mr. Barry set out to write books. In Lunatics he has partnered with the well-known television writer Alan Zweibel. The result is a book that borders on strange: full of complex and improbable plot twists.”

Millions of readers have enjoyed the weekly Miami Herald columns by Dave Barry and most people have their favorite ones (for this reviewer it is “Science: It’s Just Not Fair,” Miami Herald, March 22, 1998, dealing with students and science fairs).

After his “retirement” from the newspaper in 2005, Mr. Barry set out to write books. In Lunatics he has partnered with the well-known television writer Alan Zweibel. The result is a book that borders on strange: full of complex and improbable plot twists.

The story revolves around two characters: mild-mannered Philip Horkman owns a pet shop (with a number of rare animals) and referees kids’ soccer matches for a girls 11-and-under league. Jeffrey Peckerman, on the other hand, is a loud and obnoxious forensic plumber (yes, there really is such a profession) whose daughter plays on one of the teams.

Bad blood ensues after Horkman rules that Peckerman’s daughter was off-sides during a crucial play. The ruling cost her team the league championship. Peckerman goes to the pet store to have it out with Horkman and the fun begins.

At most times antagonistic to one another, the two are caught up in a series of events beyond their control. They are forced to cooperate when they fumble into a series of experiences that involve cruise ships, undercover agents, conspiracies, and international incidents. Oh, and they connect with Coast Guard Salamander Unit 9, which does not exist. Let me repeat emphatically: This unit does not exist.

Once the story gets rolling, almost every chapter has the protagonists in a different part of the world, engaged in increasingly outrageous activities. Going into more detail would simply give away too much of the story. Suffice it to say that the story begins to push the limits of credibility.

The story ends where it began: on the soccer field. Horkman is back as a referee in a play-off game for the girls 11 and under championship. But where are Peckerman and his daughter? Read Lunatics and see.

And there are some drawbacks to this book. When two people collaborate to write fiction, the result can be somewhat uneven. The chapters alternate between the characters. If you don’t pay attention to the chapter headings, it can be a little confusing as to which character is describing the action.

The most disappointing aspect of the book is the frequent potty humor and profanity. As the story progresses, Peckerman increasingly falls back on the “f-word” for emphasis. There are better ways to express anger and frustration in dialogue.

Information accompanying the book indicates that Universal Pictures has acquired film rights to the novel. There are definitely enough situations in Lunatics that will translate well into sight gags in the movie. Let’s hope the filmmakers can make some of the implausibility of Lunatics seem plausible.