The Luminous Heart of Jonah S. 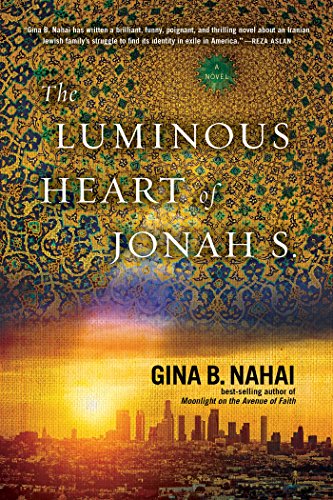 “. . . the novel’s epic sweep, engaging prose, suspenseful plot, sense of humor, and introduction to a fascinating subculture outweigh its flaws.”

Gina Nahai’s fifth novel, The Luminous Heart of Jonah S., is a wide-ranging, page-turning, magical realist, multigenerational family saga and Iranian-Jewish-American immigration tale enveloped in a murder mystery. Like any ambitious genre-bending work this novel has its shortcomings, but it both entertains and instructs, and its differing genres seem more complementary than conflicting.

The family at the heart of this saga is that of the Soleymans, whose family tree precedes the text, and while the chart is helpful, a multipage list of the novel’s many other characters would have also been useful. As is, all but the most attentive readers will find themselves flipping back 200 pages to reread a character’s previous appearance in the novel and keep track of its interwoven plot threads.

The novel opens in Los Angeles in 2013 with the murder of a character referred to as Raphael’s son, then retraces the Soleyman family’s backstory in Teheran from the 1940s to the 1970s, before returning to Los Angeles with side trips to New York, Edmonton, and Toronto. Nearly everyone in Raphael’s son’s life from next of kin and employees to the investors he swindled in a Ponzi scheme had motives to murder him, but only a few had the means and opportunity.

Raphael’s son’s body is discovered in his car outside the gate to his $52 million mansion by his wife, but when the police arrive his body is missing and all that remains is his blood stained Aston-Martin. Dead bodies disappear elsewhere in the novel, but this seems more like foul play than magical realism.

In the Los Angeles sections Nahai repeatedly catalogs her characters’ possessions, their prices and the names of the celebrities who also own them to convey the crass and shallow materialism of newly rich members of her community, but this quickly becomes tedious. Her snarky sarcastic tone reflects an ambivalence toward her fellow Iranian Jewish Los Angelenos or perhaps a blend of affection and embarrassment of the kind novelist Boris Fishman shows toward his fellow Russian-Jewish immigrants.

After being treated as second class citizens or worse for two and a half millennia Jewish Iranians first acquired the opportunity to become affluent and attain higher education in the middle of the previous century during a period of rapid economic growth and income inequality under the last two Shahs. It was then that the Soleyman dynasty began with Izikiel who became wealthy in the fabric trade.

Izikiel and his older son Raphael share a genetic disorder in which their hearts glow like light bulbs through translucent chests. On a nocturnal stroll in Teheran Raphael meets a swarthy Jewish woman a dozen years his senior from the Persian Gulf port city Bushehr with whom he enters into a temporary marriage under Sharia law despite both parties being Jewish rather than Muslim.

Raphael’s family tolerates her until his and Izikiel’s deaths 14 years later when Raphael’s younger brother Aaron, who inherits the business and the family mansion, unceremoniously evicts her from the smaller house next door. She returns a few years later in her mid to late forties with a boy she named “Raphael’s son” whom she insists is her late husband’s rightful heir though the child was born 13 months after his alleged father’s death.

Aaron pays his former sister-in-law whom the family now calls the Black Bitch of Bushehr to go away, but she keeps coming back dragging the child with her to insist on her and her son’s rights, collect additional payments, and curse the new occupants of the smaller house, a physician, her mathematics professor husband, and their children, all of whom except the oldest daughter Elizabeth die in a flood. 15 year old orphan Elizabeth, a mathematical prodigy whose body smells like the Caspian Sea, proposes to 30 year old Aaron who accepts, which further enrages the Black Bitch of Bushehr who becomes the prime suspect when Aaron and Elizabeth’s younger daughter Noor is kidnapped.

Aaron is murdered by an adulterous paramour’s nephew who, though a Harvard graduate with much to look forward to, kills himself after avenging his aunt’s dishonor. The incident reveals the gap between western mores and traditional middle-eastern codes of probity.

The humiliation of being dragged by his mother to beg from the Soleymans embitters Raphael’s son and turns him into a ruthless sociopath. During the revolution he briefly converts to Islam and becomes a professional blackmailer falsely incriminating wealthy Iranians and extorting a fortune from their families before getting charges against their jailed loved ones dropped.

He uses the small fortune he acquired in Iran to create a larger one in Los Angeles where he returns to Judaism and becomes the west coast equivalent of Bernie Madoff, though unlike Madoff he deliberately intends his victims harm, avoids arrest by keeping no written records, and manages to keep his fortune. The job of solving his murder falls on Iranian-Jewish LAPD detective and exception to ethnic stereotype Leon Pulitzer whose confidant is Elizabeth’s daughter and Nahai’s alter-ego Angela Soleyman.

The narrative, however, devotes as much space to the white sheep of the Soleyman family as to the black. Elizabeth’s story of escape from revolutionary Iran and beginning anew in Los Angeles is as admirable as Raphael’s son’s is unsavory.

The novel’s greatest shortcoming is the third-person narrator’s telling and indeed analyzing what the characters are thinking or feeling rather than letting them reveal their inner lives through dialogue or interior monologues. The exception is Angela’s more personal first person blog post epilogue in which she reveals who killed Raphael’s son, but since Angela is Nahai’s alter ego, this is an exception that proves the rule.

Nonetheless, the novel’s epic sweep, engaging prose, suspenseful plot, sense of humor, and introduction to a fascinating subculture outweigh its flaws. Readers willing to give The Luminous Heart of Jonah S. the concentration its many characters and interlacing subplots demand will be amply requited, and inattentive readers will find this is a book that rewards rereading.