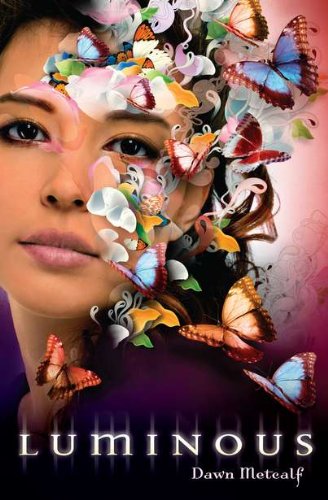 “With this dazzling debut novel, the author proves herself a highly talented wordsmith. She creates surprising and unique metaphors, and uses vivid word combinations . . . She skillfully explores the shadowy domain between life and death, the place in which body and mind have become separated.”

Those who read young adult speculative fiction are willing and even eager to suspend disbelief in order to fall into the story and live with the characters. It seems possible that a girl named Bella can love a vampire named Edward (Twilight); that a girl called Kat is forced to fight other teens to the death on live television (Hunger Games); or that a million people are held as inmates by a sentient prison and only teens Finn and Claudia have any chance of freeing them (Incarceron). Readers can identify with the characters and want to inhabit their worlds for the duration.

Luminous, however, may ask too much of its readers. At the book’s start, 17-year-old Consuela suffers a fainting spell after hearing voices from a mirror in a mall dressing room. Shortly after returning home and showering, she discovers a mushy spot on the back of her neck. Consuela digs her fingers into the area and discovers that she can unzip her skin and step out of it, leaving behind only her skeleton. She hangs her skin in the closet and as a skeleton, finds her way into the Flow, an amorphous and ephemeral time/space warp that parallels reality.

As if having the main character be a skeleton that somehow manages to walk, talk, and think despite the absence of organs and tissue isn’t gruesome enough, the author populates the Flow with a cast that defies comprehension and whose appeal is limited.

There’s Sissy, who loses eyeballs and other bodily parts on a seemingly random basis; Wish, who breaks off a regenerating tooth from his mouth to grant a person’s most ardent desire; Yad, who draws protective charms with his own bloody fingers; and Tender, who dislocates his jaw and hungrily feeds on pain and the darkness of karmic backwash. It is difficult to identify with these characters or to want to live with them for all these pages.

The book’s premise is promising: a group of teens with unusual abilities is charged with saving the lives of strangers in the real world—a world they apparently can no longer enter. And it’s an engaging idea that Consuela can clothe herself as needed in skins she makes from fire, water, air, and feathers to rescue people from a variety of deadly situations; however, the reader drifts through the Flow in the first half of the book as lost and confused as its young inhabitants.

An escalating sense of urgency and tension develops in the second half of the story when someone starts to murder the Flow’s denizens in particularly horrifying ways.

When the true nature and purpose of the Flow are revealed, the disparate elements coalesce in an unexpected way. While writing pundits generally recommend avoiding the literary device Ms. Metcalf employs, it works in this novel. One understands what the teens are trying to accomplish and the dangers inherent in their attempts. Their time is restricted and their ability to change outcomes in the real world has boundaries.

It’s said that people may frame the unknown within the context of their cultural paradigm. For example, during the Middle Ages a woman might have experienced an episode of sleep paralysis as an incubus sitting on her chest. A man today may consider the same neurological phenomenon to be an alien abduction.

Consuela, a Mexican Latina, infuses the unknowable Flow with her own cultural context. She chooses to appear in her skeletal form, in her luminous bones, for much of the book. She blunders into a Day of the Dead fiesta filled with symbols of that holiday: grinning Calaveras, and dozens of dancing skeletons in festive costumes, marigolds, and strings of papel picado hanging from the ceiling. Consuela dances with the bones of her beloved grandmother who ultimately refuses to let her stay at the party, and in a poignant moment, leads her back into the Flow.

With this dazzling debut novel, the author proves herself a highly talented wordsmith. She creates surprising and unique metaphors, and uses vivid word combinations to convey the frightful rightness of Consuela’s being in the Flow.

Ms. Metcalf describes herself as a dark and quirky writer, traits readily apparent in this story. She skillfully explores the shadowy domain between life and death, the place in which body and mind have become separated. Readers, however, must be willing to navigate the often disturbing imagery to reach the story’s oddly satisfying conclusion.