LudoBites: Recipes and Stories from the Pop-Up Restaurants of Ludo Lefebvre 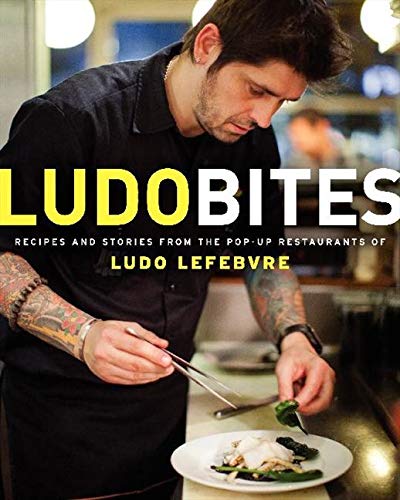 “While the pop-up restaurant may represent the anti fine-dining model, it’s not exactly dining for the 99%. In fact it has created an elitist experience of its own.”

LudoBites, the L.A. pop-up restaurant that started the next big thing in restaurant dining, began like many innovations as a kind of accident of fate. Ludo Lefebvre, the former chef of L.A.’s highly acclaimed restaurant, Bastide, was looking for space to open up his own restaurant.

After a year of looking, he felt he needed to start cooking and took up temporary residence in a bakery that was otherwise closed at night. It was supposed to be a one-off engagement just until he found his own space.

The first LudoBites, as he called it, ran for about ten weeks in the fall of 2007 and was a roaring success. By the time he was operating Ludobites 4.0 in the spring of 2010, Chef Lefebvre, or Ludo as he is known beyond his staff, began to realize he had created a new restaurant model to which he was wholly committed.

Once diners embraced the concept, the pop-up model was copied by other chefs. Now pop-up restaurants turn up regularly in many urban locations around the world. Like food trucks (for which Chef Lefebvre also takes credit), the pop-up restaurant is changing the way we think about dining and allows chefs to take greater culinary risks without the high cost of opening up a traditional restaurant.

More than just a restaurant, the pop-up is culinary performance art. The dynamic between the diner and the chef is different than in an ordinary restaurant. It is both intimate and fluid. In a temporary space that does not usually operate as a restaurant, all kinds of things can go wrong. You have to remain flexible, creative and above all you have to be disciplined. Having a big ego also helps.

Take one look at a picture of Ludo Lefebvre and you know you are dealing with someone intense. To quote Ludo himself, he looks like a “tattooed French asshole”—which is probably just the kind of person you need to pull off a successful pop-up restaurant run like guerilla warfare.

Of course it really all comes down to the food, and judging from the recipes and photos in LudoBites, you will be left wishing you could be one of the lucky people to snag a reservation when he announces the dates of his next pop-up—don’t count on it though because reservations for LudoBites sell out within sixty seconds of their release on OpenTable.

Maybe that’s one of the reasons he decided to write LudoBites. If you can’t eat there, at least you can try and make some of his recipes. But don’t count on that, either. Most of the recipes are as complicated as he is and as in a restaurant, they are meant to be prepared and eaten right away. (I made the Brocamole—without a doubt the easiest recipe in the book—a few hours in advance and by the time it was served, it had already lost some of its bright green color and was watery at the bottom of the bowl like coleslaw that has been left in the fridge overnight.)

If you want to impress your friends, be prepared to spend your time in the kitchen right up until you call your guests to the table. Restaurant cooking is not the same as home cooking no matter how many times a restaurant chef tries to pass off his recipes in a cookbook aimed at the average home cook.

Whether you make any of the recipes or not, reading the recipes in Ludobites is compelling stuff. Chef Lefebvre who was classically trained in France, is a genius when it comes to creating surprising cross cultural flavor combinations in unexpected new takes on old standbys. This is fusion cooking 2.0.

Among his signature dishes is Foie Gras Miso Soup, best explained by the chef: “Good miso soup is a brilliant thing. I especially love when you come across the little cubes of tofu that grace some versions. Ah, I thought, but what if instead of tofu, the cubes were foie gras! So I added cubes of raw duck liver to the bowl and poured on the hot broth. The tasty fat leaches into the dashi—a home-cook-friendly broth you make in minutes, not a long-simmered French stock—infusing it with even more flavor.”

What Chef Lefebvre is doing is deceptively simple; foie gras mimics the texture of tofu while adding more flavor from the duck fat. That’s the beauty of the way his mind works. The aim of LudoBites is to prepare good food simply, but the trick is to do it well. (Although not all of his food is as uncomplicated as Foie Gras Miso Soup—many of his recipes are multi-stepped and require specialty ingredients like orange oil, acacia honey or xanthan gum to name but three.)

Beyond the recipes, LudoBites serves as a kind of scrapbook documenting each of the seven LudoBites to date including stories, recipes, and photos. Each of the pop-ups was unique and the brief essays at the beginning of each of the seven chapters documents the characteristics of each pop-up along with the overall evolution of both the concept and the chef.

The stories read like journal entries and reveal Ludo Lefebvre to be as complex and forceful as his food. Like most chefs, he is a tyrant and a bully in the kitchen. He refers to himself as having “culinary OCD” and many of his temporary staff end up quitting in tears or anger.

At the same time he seems to genuinely care about his employees and is very proud when they master a new technique or even just make it to the end of a ten-week run of the restaurant. At heart, Chef Lefebvre is a teacher, just don’t argue with him during service because the only response he expects is “yes, Chef.” Maybe LudoBites refers to more than just his food.

His relationship with food critics is equally complicated and reveals a certain vulnerability that humanizes him. Several times throughout the book, Chef Lefebvre claims that he doesn’t cook to please the critics; it’s the customers whose opinion matters to him.

Yet when Jonathan Gold, L.A.’s most respected food critic was turned away at the first LudoBites, Ludo recognized him and had his wife run after him down the street to ask him if he would wait 45 minutes for a table. He was equally thrilled when he learned that Sam Sifton, who was then the restaurant critic of the New York Times had eaten at LudoBites incognito.

The heaps of false modesty when Chef Lefebvre gets rave reviews from these critics is peppered throughout the book and is frankly hilarious: “After the onslaught of amazing press throughout LudoBites 4.0 and 5.0, we got so tired of reading about ourselves, I can only imagine how sick L.A. was of reading anything concerning us or hearing the name LudoBites.”
Or how about this from his preface to his recipe for Lobster Udon Vadouvan: “Jonathan Gold is a much better writer than I am, so I will let him give the summary of this dish. He described it as one of the Top 10 Dishes of 2007 in the L.A. Weekly: ‘I remember the udon, cooked softer than any Japanese chef would dare, seasoned with the French-style Sri Lankan curry blend called vadouvan, that with its citrus-peel tang and burnt-onion sweetness tasted almost exactly like a bowl of the thick Iranian soup asht—a four-culture carom shot that landed exactly on point.’” Aw shucks.

But the most intriguing relationship is the one Ludo has with L.A.’s numerous food bloggers. He may say he doesn’t cook for the critics, but he knows that the success of LudoBites, whether he likes it or not, is dependent on the blogosphere. When in the early days a blogger took to Twitter to complain that “UMMM . . . just called ludobites for tonights menu and they say, “the chef is in a bad mood and doesnt want to cook tonight, were CLOSED WTF?!” Chef Lefebvre found out just how powerful the new media is because the incident went viral, and there was some bad publicity. As a result, Ludo practically put out an APB on the blogger and when she did finally show up one night in the restaurant, he confronted her but, as he tells it, they ended up as great friends and he even went to her wedding.

In his book Ludo gives a lot of credit to the food bloggers who have undoubtedly helped make LudoBites the success that it is, but there also seems to be a certain underlying resentment that he is dependent on them as well. In the age of Twitter your customers truly are your critics, so you are cooking for the critics no matter what. That’s a lot pressure—no wonder he barks at his staff.

For the moment, the pop-up restaurant seems to have taken hold. While the pop-up restaurant may represent the anti fine-dining model, it’s not exactly dining for the 99%. In fact it has created an elitist experience of its own. A reservation at any pop-up will earn you bragging rights given the scarcity, but will the public eventually tire of the chase?