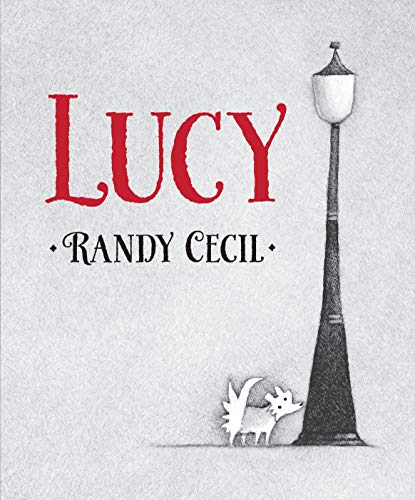 Randy Cecil (Brontorina) is the illustrator of over 20 books for children. His latest, Lucy, which he wrote and illustrated, feels like a remnant of a bygone age.

The book’s unusual size (144 pages) and mostly black and white cover announce it as something unusual and intriguing for a picture book. But it’s Cecil’s grainy duotone paintings, presented in circular layouts throughout the book, that create and sustain the feeling of peeking through a magical spyglass into a charming old-time town, one where laundry is still dried on lines hanging between apartments and the mustachioed butcher still sweeps the sidewalk out front of his shop. This is Bloomville.

The book’s three main characters (painted with wonky eyes and oddly-shaped heads) are all as quirky as the world they inhabit: Lucy, the plucky but sad and hungry homeless dog; Eleanor, a lonely girl who feeds Lucy with morsels lowered by string from her window; and Sam, Lucy’s father, a grocery store clerk with a gift for juggling anything from snow globes to dinnerware—so long as nobody’s watching.

The story, enchantingly told in acts rather than chapters, launches each protagonist’s tale separately, cycling through their daily routines, repeating similar refrains (“And [Lucy] was off/past Bertolt’s butcher shop/past the diner with questionable scraps”)—the effect of which is a pleasing rhythm. And it’s a pleasing rhythm with rising tension because, however repetitive their days are, all three characters are striving to change their lives. All three crave something: Lucy, a new home; Eleanor, a companion; Sam, the confidence to perform in public.

This all adds up to a delightful sense of anticipation. It seems inevitable that these unrelated (or only overlapping) tales will come together in the final act—and in the most unexpectedly clever way.

The stories do meet in an unexpected way, but there’s nothing especially clever about it. In fact, it feels slightly forced. After Eleanor encourages her father, he improves to the point he’s willing to prove his mettle on stage. But he winds up juggling a certain toy that brings Lucy leaping into his act (to the audience’s delight)—which leads to the dog’s adoption by Sam and Eleanor. This solution will likely satisfy some readers, as all three characters have given one another what they needed. But others will shrug at a climax that fails to live up either to the high bar of quirkiness established by the book up to that point—and to surprise them with something truly memorable they didn’t see coming.

But whether or not Cecil juggles his stories as well as Sam juggled his toys matters less than the fact that Bloomville is a place many readers will be happy to have visited—and wish to revisit again. It’s a kinder, gentler, altogether more charming world than our own, and its citizens will entertain. So long as somebody’s watching.