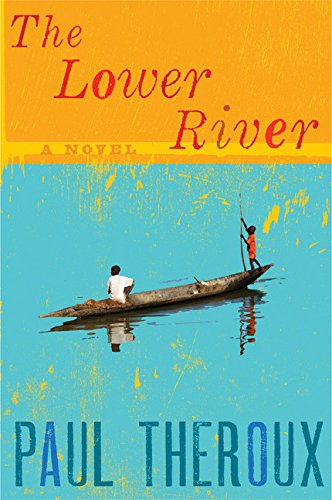 “Theroux commands the reader’s attention with his vivid descriptions of village life and masterful use of the language. . . . a book that deserves to be read.”

Paul Theroux left the Peace Corps more than 40 years ago, but he maintains that his formative experiences as an English teacher in Malawi made him a writer. Many of his best works of fiction, including My Secret History and My Other Life draw heavily from his own life experiences in Africa.

His latest novel, The Lower River, is yet another deeply personal, immensely readable tale of suspense that draws the reader into the world of a forlorn African village and an American protagonist who learns hard lessons about a place he once found idyllic.

Ellis Hock helped build a school as a Peace Corps volunteer in a fictional part of Malawi, then called Nyasaland, called The Lower River in the sixties. Hock falls in love with the place, despite its poverty and remoteness, and would have been content to stay there had his father not taken ill during his fourth year in the village.

Hock returns to Medford, Massachusetts, Mr. Theroux’s hometown, and, at 26, assumes control of the family clothing store after his father dies, out of a sense of duty to carry on the family business.

Hock marries and has a child, assuming “the life sentence he once feared.” “Saturated” with the town he grew up in, he spends 30 years in an unhappy rut, running the store and going through the motions of a loveless marriage, until one day, his wife discovers dozens of flirtatious messages he exchanged with female customers on his mobile phone.

Shortly thereafter, the couple divorces, and their only child greedily asks Hock for her “cut” of the inheritance—even though he’s only 62 and still in reasonably good health.

Hock expects the remaining chapters of his life to be a “withdrawal, a growing smaller, until finally he would be forgotten.” But rather than let that happen, he decides to revisit The Lower River, imagining that he might be able to replicate the happiness he found there in the 60s.

Author Theroux himself journeyed back to the village he lived in as a Peace Corps Volunteer more than 30 years later, describing his acute sense of disappointment in Dark Star Safari, his brutally honest account of his travels across the continent.

Hock returns to find Malabo, the village he once found enchanting, quietly decaying. No Peace Corps volunteers had come to replace him, the school was abandoned, and many of the villagers were suffering from AIDS and other maladies.

As the lone mzungu (white person) to have lived in Malabo, Hock has been accorded a certain degree of fame, with many of the villagers having heard about him from their ancestors, so he’s accorded a measure of hospitality upon arrival.

But as the days slip by, he gradually realizes that no matter how good his intentions—he hopes to refurbish the school and brings gifts—he can’t escape the rich American/poor African dynamic that colors his relationships with the villagers, who see him as a human ATM and have little interest in the school he built.

In Dark Star Safari, Mr. Theroux was critical of aid agencies and other do-gooders who come to Africa to help, but only end up creating dependency. He was also personally aggrieved by the arrogant attitude of some of the NGO employees he encountered, particularly those who blew past him in Land Rovers, refusing to stop and give him a lift in remote areas.

Mr. Theroux’s deep skepticism about the impact of aid groups in Africa is evident throughout the book.

“Altruism was unknown,” he writes, describing the villagers’ suspicion of Hock’s motives. “40 years of aid and charities and NGO’s taught them that. Only self-interested outsiders trifled with Africa, so Africa punished them for it.”

Hock’s punishment is that he is effectively imprisoned in the village, a curse that apparently also happened to Mr. Theroux in real life in the 1960s. Mr. Theroux escaped the remote village he found himself in after just a few days, but Hock’s confinement drags on for months, as a result the story stalls a bit in a few spots.

But Mr. Theroux commands the reader’s attention with his vivid descriptions of village life and masterful use of the language. His ability to find a novel way to describe a hot day, for example, is quite beautiful.

“All day long in Malabo, the heat sank lower, darting its tongue at him, licking at his head, swelling, growing heavier, dropping over him, creeping closer as the day ran on, encircling him. Often there was no sky at all, nothing that matched the word, the sun just a ragged patch of muted light in a threadbare blanket overfolded above him, no blue anywhere, nothing but the fuzzy canopy of gray over the colorless village.”

The story is propelled not just by our desire to see Hock escape but also his unusual, paternalistic love interest: Zizi, a teenage girl who is also the granddaughter of a woman he wanted to marry years ago, during his first stint in the village. The teen waits on Hock hand-and-foot, and he has an odd relationship with her that is both paternalistic and sexual. The reader can’t help but root against what appears to be an exploitative relationship, but at the same time, Hock is Zizi’s only ticket out of the village.

I found their odd relationship believable, and Mr. Theroux’s deft storytelling interest kept me engaged throughout.

Lower River is a story about memory, loss of innocence, the impossibility of returning to a place and expecting a similar experience, and growing old. It’s also about the gap between cultures and the folly of believing that outsiders can bring real change to developing countries mired in poverty.

Readers may not agree with Mr. Theroux’s fatalistic attitude toward Western influence in Africa, and some will find the ending predictable, but this is a book that deserves to be read.