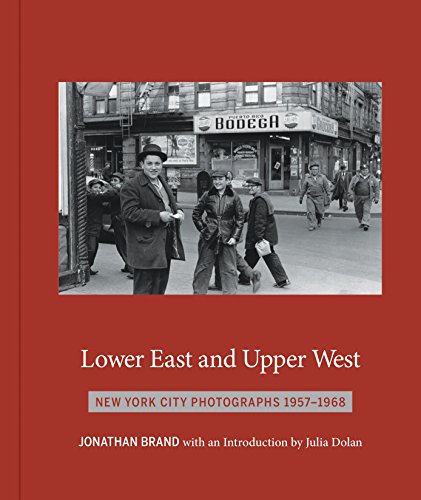 At its heart, every major city is a collection of neighborhoods. This includes New York City. Jonathan Brand, a former census taker and ad agency copywriter, knew New York City well. In his spare time, he was a street photographer. He snapped photos not as a tourist but as a permanent resident. Living on both the Lower East and Upper West sides of New York, he captures city life in vivid black and white images. The ever-forward march of history and the “white box” phenomenon have elevated these images from mere snaps to glorious historical relics. Lower East and Upper West: New York City Photographs 1957–1968 collects Mr. Brand’s images.

The images themselves catalog the variety of urban domesticity. Whether it is a toddler staring through a fence or Ralph Kramden-esque garbage men going about their daily business, Brand’s photos reveal the innate humanity of the subject. In any other context, these could be family photos glued into an album or someone’s social media feed. The challenge is to avoid using the term Mad Men to help contextualize these random faces and scenes. Granted, Brand worked as a copywriter in the same era as the AMC prestigious television program. Luckily, Brand the street photographer gives his images enough grit and grime to avoid the gloss and sheen of an advertisement.

Brand came to photography with the acquisition of a camera “while on a Fulbright scholarship in Oslo.” As Julia Dolan explains in the Introduction, “He attended night classes with Bruce Davidson and David Vestal in 1964 and ’65, and with Garry Winogrand and Richard Avedon in 1965 and ’66.” Brand and Winogrand became close friends.

Dolan, the Minor White Curator of Photography at the Portland Museum of Oregon, organized an exhibit featuring the work of Brand and Winogrand. Dolan goes on to say, “Brand’s love for his family and friends—and for humanity in general—dovetails with his love for his medium and his city. This love unites his homes on East 4th Street and West 89th Street, and brackets the diverse neighborhoods situated within the more than five miles that separate them.”

Lower East and Upper West chronicle New York City from the late fifties to the late sixties. Tumultuous change, “urban renewal,” and racial strife mark these violent decades, but in these photographs these charged descriptors lay in the background. Instead children play in the park, men wear suits and hats, and families wait on front stoops.

Most photos are one-offs, but Brand uses his camera to capture events in multiple images. One set shows two little girls playing double dutch in front of a camera shop. One end of the rope is tied up to the store front. The girls play. Then a man jumps in, but steps on the rope. Later two women walk past. The final image is of the girls sitting down, the rope untied and at their feet. This all happened on the Upper West Side in 1965. (Explanatory notes on the photographs, nothing more than a line or two with a date, are at the end of the book.)