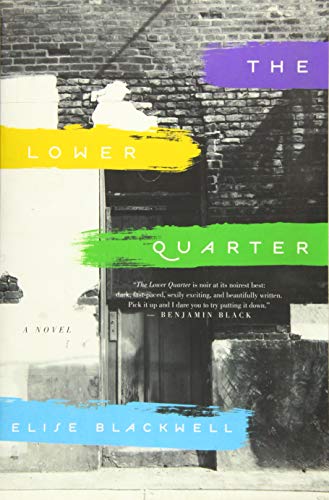 “Fans of literary mysteries should love The Lower Quarter.”

As storm waters from Hurricane Katrina recede, life slowly returns to the damaged city of New Orleans and its restoration begins as seen through the eyes of four interlinked, but very different characters.

One of the first residents to return is Joanna, an art restorer who has a small shop in what is known as the Lower Quarter, neither a wealthy section of New Orleans, nor a desperately poor one. Like Johanna, the Lower Quarter is damaged but mostly intact. “Looking across the vacant street was like looking through water, as though the Lower Quarter had indeed flooded and was aquarium still . . . The effect was the same as looking at an old black-and-white photograph, as though the colors she saw were superimposed, painted on years after the fact by a moderately skilled artist.”

What Johanna sees in the newspaper is black-and-white also, the photograph of an unidentified man murdered before Katrina hit, but only found in a local hotel after the hurricane passed. It was Ladislav, a face she had not seen for ten years and had hoped never see again. “The room went from warm to cold, and Johanna shivered with recognition that there is no such thing in the world as a coincidence that large.”

Another to return to the city is Marion, a licensed masseur without a job since all the large hotels and spas are either still closed, or have just opened and have no need of her. An artist who has abandoned her art, she ignores the damaged canvases stacked against the walls of her apartment. She tends bar to pay the rent and buy food, but is barely surviving. “Right now her needs and plans were simple: Do the work she could while waiting for the blue bloods and tourists to return and spend money.”

Clay Fontenot, a member of an old, respected and very wealthy New Orleans family, lives in the Garden District, writes and illustrates graphic novels, but has a secret obsession. When Marion answers his ad, she expects to play her role as dominatrix, but that is not what Clay desires. He wants to be punished for the one time he hurt a true innocent, but he cannot resist or control his own sadistic nature. He recognizes Marion as a true submissive. She would return “. . . to hand over her fate to him because she didn’t want the responsibility—or had no idea what to do with it.”

The fourth character, whose life is intertwined with those of Johanna, Clay, and Marion, is Eli, an art thief on a unique kind of parole from a long prison term. But Eli is a unique kind of art thief; he steals art not for money, but to return art to its real owner. He works for a business specializing in finding lost or stolen art for clients in exchange for a fee. The stolen painting Eli seeks in New Orleans is work by an obscure Belgium artist, and it was last known to be in the possession of Ladislav, the murder victim found in the Lower Quarter.

When Johanna meets Eli, her reactions veer between attraction and worry. He is a handsome man, so a physical attraction does not particularly surprise her. What worries her is a trait she also recognizes in herself. “He struck her as a man who was not so much dishonest as accustomed to hiding—a man who could evacuate his own face, a man whose soul could never be stolen by a camera.” When she learns he is searching for the third picture by the Belgium artist, she is even more worried and frightened.

Then there is the question of who murdered Ladislav, and she turns to Clay to ask if he knows Ladislav had come to New Orleans. Did Ladislav know she had the painting? Clay owes her the truth, because she was the innocent victim he had whipped. Johanna is the reason Clay believes he needs punishing.

When Clay’s father, Gerard Fontenot, returns to New Orleans, Marion witnesses a confrontation between the two, and realizes Clay both fears and hates his father. It is the reason for his need to sadistically dominate his lovers, because he is dominated by his father.

As the four lives of the four characters move toward intersection, motivations change, and each one seeks to start over much as the city itself begins to start over.

The Lower Quarter by Elise Blackwell is not so much a mystery as a character study. Are individuals able to restore their lives and start over, putting their disappointments and pain behind them? Ms. Blackwell uses art, specifically painting, as a symbol of this restoration, and it works wonderfully well as a literary device. Using a different point of view in each successive chapter, while not an original device, also works well. The novel is a compelling blend of character and setting, without either overwhelming the other. Fans of literary mysteries should love The Lower Quarter.