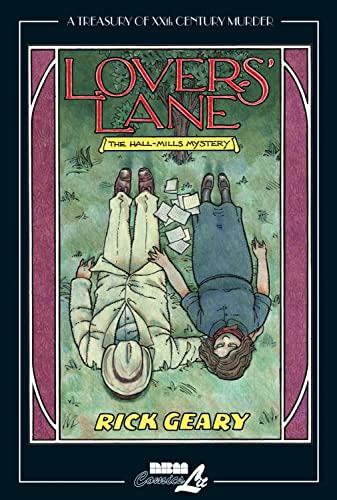 “Rick Geary is one of our best and most consistent graphic novelists. Lovers’ Lane is further proof.”

Few events grab the public consciousness more than an unsolved crime. In Lovers’ Lane, writer and illustrator Rick Geary has found a doozy, a case long relegated to the near-forgotten bin of unsolved crimes.

It is 1922. In the town of New Brunswick, New Jersey, a pastor and a member of his choir are found dead. His arm is under her head, her hand on his thigh. For the time in which the murders occur these are mightily suggestive positions. It is clear the bodies have been deliberately arranged.

The two were found side by side with their love letters arranged around their bodies. Both have been shot. He once, she three times.

In addition to the gunshots, the woman has also suffered the additional indignity of having her throat cut. Some speculate her wound is perhaps a nod toward her status in the church choir.

This is a brutal double murder that has no place in the clean and very well-kept city of New Brunswick. In 1922 such an event is nearly unthinkable.

The city and its residents are on display as much as the victims. The women walk in modest ankle-length skirts and coats. The men are seldom without a collar and still button their shirts to the top button. There is a chaste, orderly look to life. The town is clean, the streetcars running along tree-lined streets screaming “planned perfection.”

Rick Geary introduces the town before he shows us the victims. Like the best of crime writers, he writes not only of the crime, but of everything around it. The town and the period of America in which the crime occurs are as central to the story as the unfortunate lovers.

This focus allows us to contrast what unfolded nearly a hundred years ago against the rapid fire, know everything in a second, finely detailed of America today.

In one of the most telling examples, author Geary details the way the crime scene was overrun with onlookers while the local authorities did little if anything to prevent the contamination. Souvenirs are taken with little regard for their actual worth. The easygoing nature with which the police treat the crime scene would be unthinkable today.

The portrayal of this New Brunswick brings to mind the images of turn of the century America as created by director Vincent Minnelli for the film Meet Me in St. Louis. Like Minnelli, Mr. Geary bring us a near idyllic small-town America, also celebrated for decades by Walt Disney in many of his films.

Unlike Minnelli’s and Disney’s, Mr. Geary’s skill keeps us eerily detached from the images his art provokes. He lays out the story for us to see. Simple as that. Not once does he pass judgment on the events, nor does he allow his art to suggest what we should think.

Where Disney and Minnelli created simplistic and idealized versions of America, Mr. Geary gives equal time to the action at the side of the road. He never fails to quietly reveal the hidden corners of this nearly fictional paradise. This quality of his art is closer to the atmospheric, everyday look of David Lynch than those masters from a previous generation.

Mr. Geary is a master at conveying the unsaid through a simple expression, a slight look in the eye of an incidental character. It is a skill he was bringing to graphic novels back in the early nineties when he was creating memorable versions of The Invisible Man, Wuthering Heights, and Great Expectations for a revitalized series of Classics Illustrated books. (All three of which have been recently reprinted by Papercutz in glorious full color hardcover editions. Each one ripe for discovery by new readers.)

The murders themselves quickly gain notoriety as the press descends upon New Brunswick with a ferocity reserved for biblical locusts. Local characters emerge and witnesses temporarily become as important as the victims. One episode tinged with odd humor involves a witness named “the Pig Lady” testifying from a bed in the courthouse.

While arrests are made and there are few detours along the way, ultimately it comes down to the spouses of the two murder victims. One is an extremely rich woman, the other a poor man perhaps somewhat dimwitted. It is an amazing mixture of characters at every level.

The trial is one of the first “trials of the century” America was able to read about. The conclusion left everyone unsatisfied with only speculation left to comfort those who were so heavily invested in its outcome.

This is the 15th volume in Mr. Geary’s ongoing series, A Treasury of XXth Century American Murder. Given the relatively unknown status of this case, it may rank among his most fascinating editions.

Rick Geary has written a book that needs to be read by fans of “CSI,” “Law and Order,” and “Major Crimes.” It is a brilliant look backward at an America that on one level is long gone, but paradoxically still exists in certain out of the way places. Rick Geary is one of our best and most consistent graphic novelists. Lovers’ Lane is simply further proof.