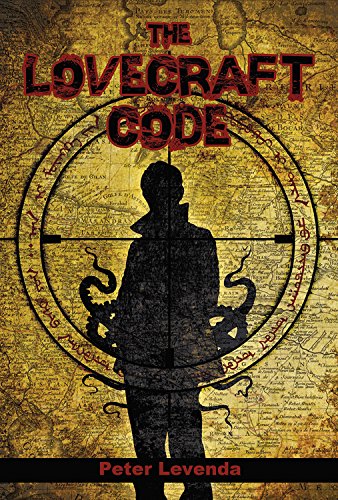 In 1926 Professor Angell dies on a Providence ferry peer, killed by an agent of Himmler sent to obtain the information Lovecraft stole.

In 1928 The Call of Cthulu appears in print and Angell’s information is brought to the reading public’s eye. No one believes it’s anything but fiction. Though Angell’s great-nephew insists the story is real, both he and his great-uncle’s memory are besmirched as those of a crackpot and a fraud.

Lovecraft’s stories gain a small but faithful following but he’s by and large unknown to the general reading public. Movies make them into confusing horrors because they, like Poe’s tales, don’t convert easily to the screen.

In 2007 a New Orleans police officer discovers two bodies chained to a structure in the basement of a house devastated by Katrina where similar crimes were committed in 1907. There are odd drawings on the walls . . .

In 2014 a member of a secret government Remote Viewing team goes berserk, raving over a vision he receives. He escapes the facility and is never seen again . . . until he reappears in the Middle East in 2016. . . .

Tenured professor Gregory Angell and his family have spent their lives trying to suppress the scandal Lovecraft caused with his stories and his ancestor’s theories. When he’s not attending his classes, he hides in his apartment to forget what he witnessed while a civilian consultant in the Middle East, something he swears he’ll never do again.

Then he meets a man named Aubrey. Angell refuses to believe what Aubrey wants: to find The Necronomicon, the very thing causing the loss of his family’s academic reputation.

Before he knows it, Angell’s on his way on a black-ops mission, not only to find the book but to prevent it from being used to resurrect the dead god who lies dreaming. The things Angell previously witnessed are mere daydreams compared to what he’s about to discover, and he no longer has the option of refusing to believe any of it.

“‘The Necronomicon was a joke, a running literary gag . . .  an invention . . . He knew these people weren’t lying, but they couldn’t be telling the truth . . . Lovecraft saw it coming . . . his stories weren’t fantasies . . . they were predictions.’”

In his search for the Necronomicon, Gregory Angell will discover the thread of truth running through the lives of everyone coming into contact with the dark tome:

Gregory Angell is now a double-edged sword, the only man between the world and its complete subjugation by an evil more ancient than time itself. In a life-or-annihilation struggle with a force from beyond the stars, whatever he chooses will mean a terrible loss of life . Can he sacrifice hundred to save millions?

This is a novel that will have the Lovecraft fan as well as the Lovecraft scholar sitting on the edge of his seat, and the historians even moreso. There is enough name-dropping with backgrounds of actual people as well as tying-in of events to give it credibility, while the premise itself sends it soaring into the realms of the most far-fetched fantasy imaginable. It will be left up to the reader to determine whether this is a superlative dive into speculative fiction or a thinly veiled documentation of actual events.

The corroborative information supplied and locale changes revealing the various characters’ point-of-view add a fever-pitch to the intensity from the first page.

With a seamless mix of Indiana Jones meets Jack Ryan, and H. P. Lovecraft teamed with Tom Clancy, The Lovecraft Code is a don’t-stop-until-every-page-has-been-read story, filled with Lovecraft’s special brand of eldritch horror and the spy thriller’s hairbreadth escapes, victories, and defeats, well-blended by author Levenda.

Whatever the reader determines, he should keep in mind these thoughts from one of the protagonists:

“‘Why didn’t we pay attention? Our artists, our writers, our musicians see farther than we do. The rest of us just play catch-up. And now it may be too late.’”

The Lovecraft Code will linger on the edge of the imagination long after the novel itself has been finished.