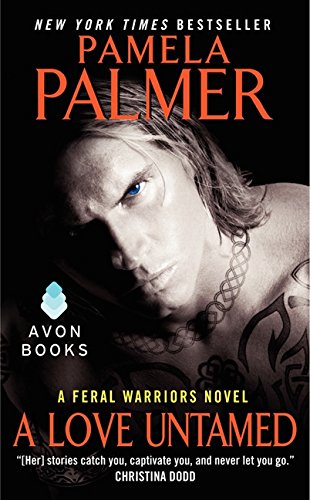 It’s shapeshifters (Therians) versus daemons (Mage) again in this seventh volume of the Feral Warriors series. This time around, the mate of pack leader, Lyon, has been kidnapped, and woe is unto to the Mage that has her!

In A Love Untamed, Pamela Palmer has created a light, if routine, tale of bulging Pecs and fair maidens in need of rescue. There is the requisite feisty girl or fairy (Ilini) in this case, Melisande, and the up-and-coming warrior who is drawn to her, Fox.

The story opens with his advancement into the tribe, and then careens into a standard kidnap plot. The dialogue is stilted, but acceptable, and the characters predictably shallow. Ms. Palmer makes her story work, though, through means of moving it along at a fast clip. Villains act villainous, heroes act heroic, and at the end of the day all is well.

Slightly troubling are the strong resemblances to J. R. Ward’s Black Dagger Brotherhood series: the pack is arranged and described much as the characters in that series; similar terms are used from everything to love mates to housing; and even Ward’s rather laughable use of misspelling to create names from common words (Lyon, Eigle, Lynks, Leperd—substitute “y” for a vowel in any word and you have a name, much like Ward’s inserting “h”).

Regardless, this book is a quick holiday or summer read. If the thought of a were-polar bear or were-alligator does not engender giggles, A Love Untamed might be an acceptable choice. If you like the idea of fantasy and sexy men but animals don’t do anything for you, the edge has to go to J. R. Ward for superior storytelling and erotica.