The Love She Left Behind: A Novel 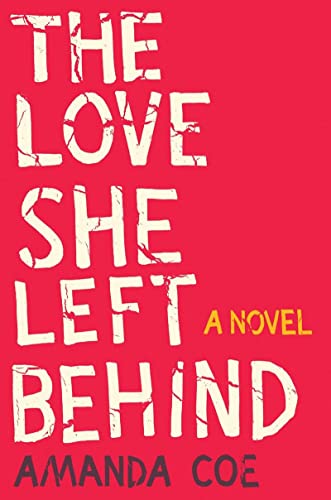 “a very intelligent book on a timeless topic, family dysfunction . . .”

Leo Tolstoy famously observed, “Happy families are all alike. Unhappy families all suffer differently.” This is why novelists keep returning to unhappy families for fresh material. From Shakespeare through Dickens and into the 21st century, intra-family dysfunction continues to provide authors with fresh material for their novels. Highly regarded recent novels such as Where’d You Go Bernadette, The Middlesteins, and The Vacationers only underscore this point.

The latest author to revel in familial misery is Amanda Coe, whose newest book, The Love She Left Behind, examines a contemporary British family immediately after the loss of Sara, the family’s mother. The book has three she central characters: Richard, a once-lauded playwright, now a widower living in a sagging country mansion, and his two step children: Louise, a modestly-talented housewife with a daughter; and Nigel, a self-absorbed attorney with a materialist wife.

Ms. Coe complements this familial core with a host of lesser characters, most notably an indolent PhD student, Mia, who becomes Richard’s crass love interest. And Coe introduces an important non-human character. It is Richard’s quasi-famous play, Bloody Empire, a Sartre-esque 1979 drama that receives as much attention and analysis as the novel’s human characters.

While The Love She Left Behind unfolds primarily in the present day, starting with Sara’s funeral, Coe offers numerous flashbacks, sometimes in brief asides, and sometimes in entire chapters. She also ends each chapter with a letter out of Richard and Sara’s past. In so doing, Coe is able to develop her characters and their family history much more completely.

The Love She Left Behind benefits from Coe’s development of complicated and realistic characters—all of whom are collections to good and bad traits, all of whom have complex intra and interpersonal issues. In the hands of a less skilled author, the resulting ennui and psychological barbed wire could make for a self-important slog.

Coe largely mitigates this potential problem by making The Love She Left Behind a high-brow comedy. Her acerbic wit is evident on nearly every page, and her word-choice is exceptionally clever. Nigel, for example, gives his wife a “tongueless, terminating kiss” and “wears a face suitable for bereavement” while checking out the butt of a young woman in tight jeans.

In another example, Coe perfectly captures the self-loathing of the teen-aged Louise: “For Louise, fifteen was turning out to be worse than fourteen, or even thirteen, a daily battle of wrongness. In her bedroom, she lived close to her reflection, tallying her many flaws and eruptions.”

The dark humor in The Love She Left Behind does not diminish the book’s essential realism. We know these people. We are these people. But realism comes with a tradeoff. There are no explosions, steamy sex scenes, or pies-in-the-face in The Love She Left Behind. There aren’t even shouting matches. Upmarket readers profess to be better than low-end clichés, but upmarket authors still know to mix in a few dollops of low brow fun. Coe does not pander to our shortcomings, and that likely shrinks the market for this book.

Amanda Coe has written a very intelligent book on a timeless topic, family dysfunction, and leavened it with considerable wit. That should be enough to make The Love She Left Behind a highly sucessful book—even if most of readers will, at some point, skim ahead in search of a torrid sex scene or a guffaw-inducing pratfall.