For the Love of Music: A Conductor's Guide to the Art of Listening 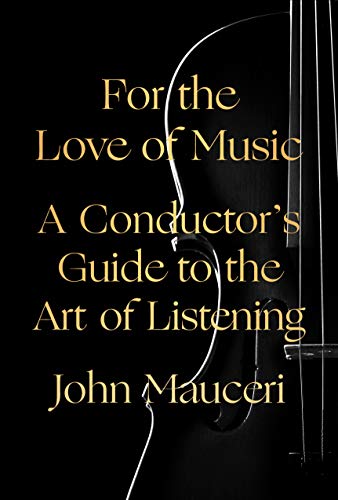 “All of these clear and beautiful examples help put the listener in control of the narrative. Mauceri’s book gives the audience power, confidence, and joy. If you commit to entering this world, you will be rewarded.”

Nobody ever seems embarrassed to say they dislike country music. In fact, the opposite is usually true: We only sheepishly admit to liking sad songs in which everyone done someone wrong. We speak the same way about rock and pop music, about our preferences for one group or one song over another. For some reason, the dialogue seems to shift when we discuss classical music¾it frequently revolves around what we do or don’t understand. Can we simply dislike a piece of classical music? Can we also learn to appreciate a piece in a way that helps us enjoy it?

In his magnificent new book, For the Love of Music, John Mauceri gives his audience permission to have preferences in classical music yet also gives non-musicians and musicians alike tools with which to better understand what they’re hearing. To engage a mixed audience is a feat; the language can neither be condescending nor overreaching. Mauceri is such a solid citizen of both countries¾music and writing¾that he skillfully guides and translates for those who are not fluent musicians. For those who are, the joy he finds in his subject matter is enough to encourage delving further into known works.

Mauceri invites his audience to become music critics. The composer and the performers are only two legs of a triangle. The third leg¾the audience¾has a job to do. “You,” he writes, “. . . are the interpreter. If you do not understand it, accept it, and embrace it, then the music does not exist as a completed action. Like a status bar when you download information on a computer, if the bar gets to 98% and doesn’t make it to the end, nothing actually has happened.”

For the listener, familiarity leads to involvement. Mauceri describes the many ways composers use the audience’s memory to aid in feeling invested. In the finale of Sibelius’s Symphony Number Two: “. . . a glorious melody is stated, complete with triumphal fanfares. It then goes away. The composer gives us a break from it in a series of far less important sequences, until more than six minutes later that melody returns, leading to a great hymn of thanksgiving and joy.” That beautiful melody, returned to us a second time, is a familiar old friend.

It’s the same mechanism that helps us appreciate jokes. “Set up a humorous situation, continue speaking, and then refer back to it. Your brain connects the two and you laugh. . . . It activates your participation in the game: you are in on it and it rewards you.”

Another composer trick for rewarding our memories is the use of an overture. An overture to an opera serves as an introduction to the melodies the listener will hear. Mauceri says of Wagner’s opera Rienzi: “. . . the audience is never more than fifteen minutes or so away from one of the great melodies presented in the famous overture¾right to the last act, with Rienzi’s prayer.”

A final feat of memory: the use of leitmotif. Richard Wagner’s series of four operas, The Ring Cycle, runs 15 hours over four days. How does Wagner guide his audience on this journey? “What Wagner did was create a set of short musical motifs that are presented at important moments in the drama and seem to represent those moments, characters, objects, and emotions. . . . This procedure mysteriously creates a permanent relationship between the music and the object.” Imagine Darth Vader’s grand, grave music. The leitmotif associated with his entrance has spanned the entire Star Wars franchise of films.

Throughout his book, Mauceri encourages us to trust what we like because it makes us feel joy, sadness, fear, the thrill of recapitulation. We trust our own opinions on other genres of music whether or not we “understand” them. He asks, “Do you need to take apart and rebuild your toaster in order to appreciate the toaster’s design and enjoy the toast it makes?”

His many examples help the audience learn to embody the music. We know that major is happy and minor is sad “. . . whether we even know what a chord is.” We might not be able to pin down what tempo a composer means by “Andante” until we’re told to imagine it as walking speed. And his description of Glinka’s overture to Ruslan and Ludmila as a “five-and-a-half-minute toboggan ride” tells you of the fast and winding journey on which you are about to embark.

All of these clear and beautiful examples help put the listener in control of the narrative. Mauceri’s book gives the audience power, confidence, and joy. If you commit to entering this world, you will be rewarded. “Music takes its time¾and your time. Should you agree to enter its realm, it will control your sense of time until it releases you when the music has ended. In this sense, classical music is both of its time, in its time, and completely timeless.”