Love Looks Not with the Eyes: Thirteen Years with Lee Alexander McQueen 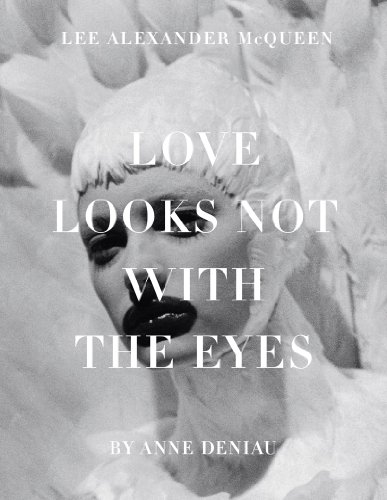 The death of Alexander McQueen is one of those events that shook the world—not just the world of fashion. Love Looks Not with the Eyes is a personal remembrance of his life, or better: a celebration of his talents and friendships.

Ms. Deniau was at first a correspondent assigned to trail Mr. McQueen during his tenure at Givenchy. Within a very short period of time she became the designer’s employee as well as a dear and treasured friend. It is primarily through her eyes and lens that this portrait of Alexander McQueen is created.

Ms. Deniau’s view of the designer is presented through photographs taken behind the scenes of his shows and in his workrooms. Each show is offered sequentially and chronologically starting in 1997 and ending in 2010, the year McQueen took his own life.

These are not the usual lush photos one usually finds in coffee table books about fashion, but rather candid and much more intimate shots revealing a more relaxed side of this incredibly talented designer. As such, you might not see an entire outfit—or even half of one—but you do get to see the details of the construction of a dress or a sketch or Mr. McQueen collaborating with the likes of Phillip Treacy or Shaun Leane.

There are 26 shows to behold in Love Looks Not with the Eyes: Thirteen Years with Lee Alexander McQueen, including some involving those who were closest to him, such as his successor Sarah Burton and the model Kate Moss.

The groundbreaking designs McQueen left behind comprise a legacy that will not soon be duplicated. Clearly he was a friend to many, one who will not soon be replaced. This book is really a visual story about the treasures that exist within each person; for McQueen it was his sense of humor, boundless talents, intimate friendships, and exquisite vulnerabilities. All of these contribute to the profound loss suffered by those of us who will forever miss him in some way, shape, or form.

Love Looks Not with the Eyes is an emotional journey through one designer’s life by one friend who saw him very clearly, with and without her camera lens. If you are like me, you will read this book and weep.