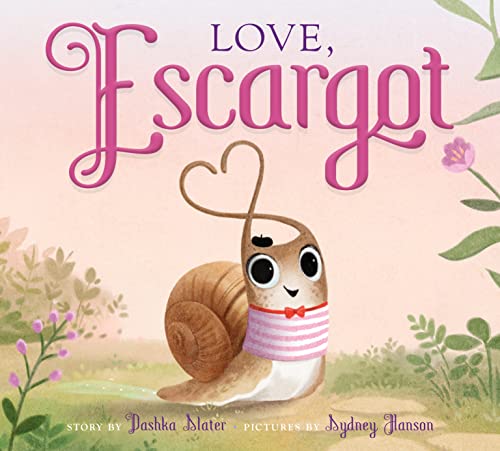 “It was love at first sight for this magnifique book.”

It is Snailentine’s Day, that glorious day when l’amour is in the air and snails are naturally sharing their love with their special snailentines.

Escargot is excitedly priming and prepping for a Snailentine’s Day party that will have yummy canapés and crudités. Bien sûr, the reader is invited to come along! “You are a snail, aren’t you?” Escargot asks the reader, noticing the reader’s “unusual” tentacles. But Escargot reassures the reader to have no fear about fitting in because “[t]he secret to being a beautiful French snail is joie de vivre, which is the happiness you bring to waving your tentacles. Let us wave them together. Voilà! You are a snail!”

Escargot does worry other snails might misconstrue the reader for a slug since they don’t have a shell. And if the shell-less reader is feeling shy at the party, which can happen to even a fierce French snail like Escargot, the ever-helpful snail suggests hiding “behind a convenient plant or rock.”

As it turns out, Escargot is the one who fears not fitting in when he arrives at the party only to discover it’s a Volentine’s Day celebration given by a vole. Quelle horreur! What’s a fierce-shy French snail to do? Obviously, hide in his shell! But Volerie quickly allays Escargot’s fears, and by party’s end, Escargot is smitten. “The vole is . . . actually . . . charmante. Her crudités are delicious, and she waves her whiskers with so much joie de vivre. She makes me feel magnifique!”

Escargot asks the reader, “Do you think . . . perhaps . . . she could be my volentine?” And mais oui, that leaves Escargot to choose the reader to be his darling petit chou of a snailentine.

This is the third book in the Escargot series by author-illustrator team, Dashka Slater and Sydney Hanson, and sans doute, it doesn’t disappoint. Slater grabs the reader’s attention from the get-go, “But now I must tell you something exciting.” The illustrations in soft-pink hues immerse you in shimmering snail magic. It was love at first sight for this magnifique book.