Love and Other Weird Things 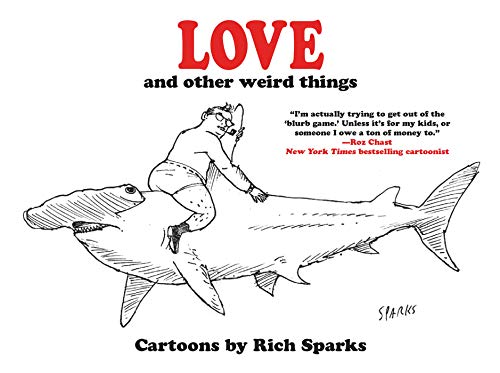 Now more than ever the nation needs an alien it can respect. Not the cute ET-type of alien, either. This one should be wearing cargo pants, smoking a cigarette, and cooking hot dogs on a BBQ. His companion should be dangling a slipper off of one foot while also smoking a cigarette with a drink in hand and looking out over the white of an empty sky in contemplation.

Those are the aliens that we crave. Thoughtful, slightly buzzed visitors mimicking our own national bliss in the privacy of Area 52. Rich Sparks is here to deliver on that need, and he has brought many, many friends and brilliant ideas with him for us to laugh and talk about.

Fully delivering on the promise of temporary escape and momentary distraction that every one-panel comic strip uses to tempt the reader, Love and Other Weird Things also brings us a pipe-smoking, sweater-clad Jack-O-Lantern carving out the head of a poor suburbanite, an assless chap and importantly, historical perspective on The Victorian Nudist.

There is also an appearance by a disturbed Pooh Bear. Far from the pastoral lands of his home in the world of A. A. Milne, the pantless bear is seen sweating profusely, his right paw trapped in a jar, beating on the door of the home of an obviously unnerved Piglet. Pooh, it seems, needs "the sweet stuff."

From the silliness of modern life and time-wasting cable shows (The Tiny Barn Movement) to the historical importance of Helen of Troy, NY (Yeah, what?) Sparks creates line-driven snapshots of how we could see the world if just a single gene shifted in our DNA. Proving that it's not what you see but how you look at life, his cartoons both broaden and challenge the reader's perspective while creating involuntary reactions that range from happiness to an occasionally strange, stark, what-the-hell happiness.

With a line that looks as if Gahan Wilson, Virg Partch, Roz Chast, and Hank Ketchum all met at Otto Mosher's Deli in Cleveland to talk about Gaar Williams work in the 1920s, art all scraggly and yet so completely coherent, Sparks has his own, distinct style. His use of space and perspective often serve to either reinforce the main gag or sometimes, add a subtle, less than noticeable second gag under the initial reaction.

Witness a vampire-like creature wearing a suit. He is sitting behind a desk, two simple pens in a block are the only thing on that desk. The pens, running top to bottom are on the same level as the vampire's noticeably pointy ears. Since all four of the objects are also the only items fully inked on the page, our naturally eyes flow up to above the strip. Where, if we have missed it the first time, we read the joke title "Bossferatu."  Sparks is making sure that, in the absence of a regular caption usually found at the bottom, we don't miss the gag, which is actually in the title. It's a clever bit of artistic "comic-insurance" to make sure that we are not lost.

Working in the one-panel format, Love and Other Weird Things is naturally going to invite comparisons to the absurdist, yet deservedly popular Far Side. While Sparks may have a cow discussing the shortcomings of modern fiction, one doubts that Gary Larson ever drew the Postmenopausal Lady of Shalott. Especially in a rowboat flipping off the universe.

This is a delightful world. One that should be discovered by anyone who has completed the eighth grade or it's equivalency. If you spent your senior year of high school working as a waitress at Friendly's or in a garage for shop credit, one or two of the jokes may elude you. It's here that Sparks betrays the literacy of his admitted influences, National Lampoon, The Firesign Theatre, and cartoons. No matter what, he is never drawing or talking down to you, only reminding you that Schrodinger, that guy you heard about on The Big Bang Theory who talked about having a cat in a box, well, his apartment may have had more than one box. . . .

Like the recently released and remastered collection of legendary Tex Avery shorts, Love and Other Weird Things is actually best experienced in smaller, shorter doses. Read seven or eight in a row and put the book down for others to pick up. Sparks is capable of inspiring both debate and deep embarrassment. But on occasion, the image of a wolf wearing a T-shirt with a human howling may cause an existential crisis as your own identity becomes shattered! Who are you, the wolf, the man, or the shirt itself?