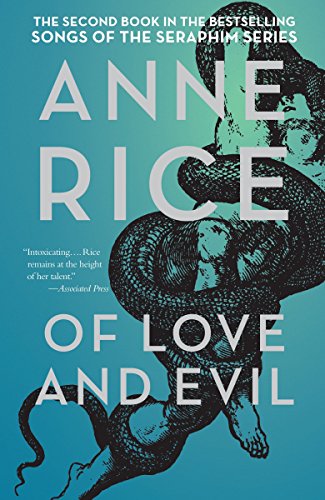 Assassin-turned-time-traveler Toby O’Dare is back in Of Love and Evil, the second installment of Anne Rice’s Song of the Seraphim series.

After leaving behind life as a ruthless killer, Toby has joined forces with angel Malchiah to help right the wrongs of the past. Recently reunited with his long-lost love Liona, and the son he never knew he had, Toby begins to tread the unsteady path between human desire and Divine influence.

When Malchiah whisks Toby into 15th century Rome to solve a crime of poison, Toby finds himself in the middle of a blood feud. Ghosts, greed, temptation, and a dash of romance attempt to carry readers through the next installment of Rice’s latest supernatural work, but unfortunately miss their mark.

The prose is flawless. Written in a tone that can only be described as biblical, Rice’s lyrically haunting style of writing suits her newest work very well. Her descriptions—especially those involving guardian angel, Malchiah—are vivid and tangible, a difficult balance to achieve when writing of supernatural beings. Although not archaic, Rice’s prose carries the weight of the historical era in which Toby is involved, and this weight carries over as a reflection of Toby’s emotional journey ahead.

However, unlike the prose, the story itself is rather tepid. It never fully leads readers in any one direction. Of Love and Evil could’ve been a romance, had Rice played up the interaction between Toby and Liona. Instead, they are written only as the couple who miraculously haven’t changed in the ten years they’ve been apart. Of Love and Evil could’ve been a thriller, or a mystery, but Rice doesn’t seem interested in providing her readers with any element of suspense. Methodically, she lays out each detail of the plot and how Toby will solve said plot, before doing exactly as we presumed she would.

This lack of excitement may, unfortunately, deter new readers from the Songs of the Seraphim project. Of Love and Evil reads like a “bridge” book, existing solely to tie two works together, despite the fact that it isn’t the middle book in a trilogy, but rather one of the first books in a proposed series.

Rice’s internal characterization of Toby is, for the most part, unseen. Only glimpses of his true emotions are given to the readers. None of the other characters are important enough to develop themselves. Rice does manage to pull Toby’s character together by the end of the book, but many readers will be discouraged, and give up before this point.

While the great pitfall of writers can be too much telling; not enough showing, Rice has managed to do the complete opposite. Toby doesn’t have much of a character arc, because she doesn’t tell us anything about him, other than what we learned in the first book.

Conversely, she tells us everything about 15th century Rome and leaves no room for imagination. While Of Love and Evil has a lot of potential, it unfortunately misses the mark because of murky characterization and a shallow plot.

But with the promise of a third book looming on the last page, perhaps Rice will develop The Songs of the Seraphim into a compelling and meaningful story