Loulou & Yves: The Untold Story of Loulou de La Falaise and the House of Saint Laurent 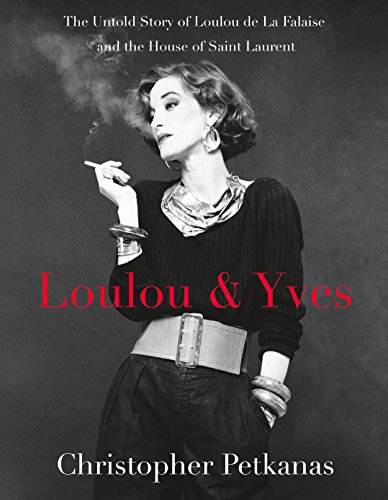 This book is so much more than one might have expected. There is a lengthy section about Loulou and her heritage and bloodlines, which in all honesty is alternately wonderfully amusing, shocking, and educational. What is most interesting here is that the book may be divided into chapters, but it might also be divided into galaxies, spheres of influence or casts of characters—all of which have one pivotal focus from which all else emanates.

From the book: “On the theory that everyone loves a cocktail party, and because people with a drink in their hand tend to be more candid, Loulou and Yves traces Loulou’s life chronologically through the memories of more than two hundred voices: husbands, lovers, extended family, friends, enemies, slightly less bitter detractors, colleagues, groupies, Yves, pundits, hangers-on and Grace Jones.”

The good news is that you are all invited to eavesdrop on every morsel of information and tidbit of gossip that so many so freely offer at this “party.”

One of the first topics that the reader will be confronted with is Loulou’s genetics, bloodlines, and family tree. By today’s standards, her youth was what one would call unconventional or bohemian, some will find it more abusive, while others might will see it as dysfunctional and insane. The truth of it is that those adjectives would be akin to saying Richard Avedon took great snap shots.

Unquestionably with so many “speakers” there has to be much more than a crumb of truth involved and, by the way, it’s pretty riveting if you like a dishy and tell all kind of reading . . . warts and all. It is truly hard to believe that anything has been held back as the comments or “tales” range from laudatory to downright going for the throat. What cannot be ignored is that this family (de La Falaise, McKendry, Birley) was absolutely magnetic chiefly because of one very “sun like” Maxime.

Imagine if you will a mixture of the Addams family, the Duggar Family, and Little Orphan Annie but all cast within the blue bloodlines in what was once called high society. With no exaggeration, the primary character from which all revolve around is Momma Maxime as she is the root from which all of these unbelievably amazing tales stem from; she is unquestionably the leader of the pack in more ways than you can ever imagine. It might be safe to say that the most precise defining term for this family might or should have been, menagerie, commune, circus, and haute hippie.

What is so startling about the book is that once the topic focuses on when Loulou and Yves became coworkers, the entire tone of the book changes dramatically from bitchy, revelatory gossip to retelling a symbiotic relationship unlike any other. The most incredible aspect is that this reviewer could actually envision the moments and scenarios that were taking place on the written page and within the inner sanctum.

With a book of this size, over 500 pages, the problem soon becomes that the even the most titillating can become somewhat boring and tedious. Sadly Loulou was just such a mess and so consistently self-destructive in so many ways that the jillions of episodes of her life and those in her orbit become somewhat expected, twisted in a way that for some might be unfathomable and for others what else would you expect from a woman whose life is far and beyond a “fractured fairy tale.”

In the end, the reader of this book must be prepared to quite literally be consumed by it; in many ways it is the train wreck that you can’t look away from. If you have unlimited curiosity of those times and an unquenchable thirst for the back stories of the characters of that era and of the fashion world, well . . . here is a book for you!