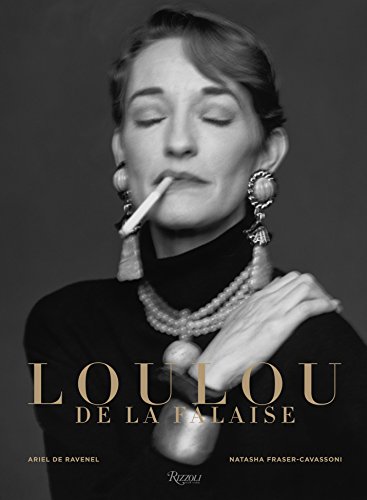 “Loulou de la Falaise is not a book only for those who know of her but for anyone who truly believes in creativity and possesses a free spirit.”

To say that Loulou de la Falaise was an icon of style and at the vanguard of fashion is indeed an understatement. To merely remember her as a muse to the great Yves St. Laurent is short sighted. Loulou was a well liked, respected, and beloved member of the international fashion community.

My experience has taught me that the universally well liked are a rare breed especially within the confines of fashion. Loulou was adored, yet she remained true to herself and most dedicated to her friend, employer and confidant Yves.

This book serves as a veritable celebration of a life well lived and abruptly cut short while still in her prime. Once she secured a foothold within the rarefied air of  5 Avenue Marceau, Loulou set about finding the man of her dreams and living a life that was hard to even dream possible. She truly was so unique that it is difficult to describe what her exact legacy is to the world of fashion. If one had to put in in the most simplistic and pedestrian words: “She just did her thing!”

Loulou is remembered via a museum worthy showing of photographs that lays testament to who and what she was during her life. What comes through it all is the feeling that you would want to be friends with someone who was that creative, that free, that inclusive. She was indeed crazy about her husband, her family, and her extended family, and even those who wanted to dislike her fell under her thrall. She was truly creative and infused her being into the lives of those she adored and into a business where she was more likely to have been ostracized than loved.

Along with the incredible photo assortments are an ocean of quotes from the most notable of fashion personalities and from her nearest and dearest friends and family. The words elicit a feeling that it is a loss not to have been absorbed into her world. You might say that there are very few if any fashion idols that can conjure such emotions for the reader.

Loulou de la Falaise is not a book only for those who know of her but for anyone who truly believes in creativity and possesses a free spirit.  Loulou was one of a kind, then and now, and there is no one who has measured up to her accomplishments and influence during her lifetime or since her death.