Lost You: A Novel 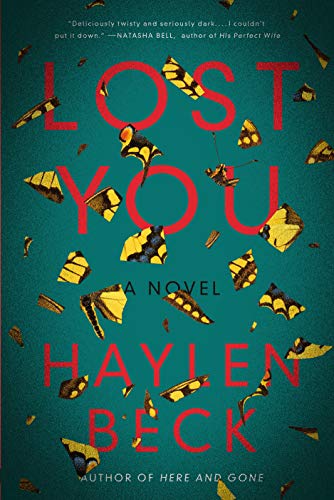 “This one truly deserves the accolade of that reviewing cliché—the “roller coaster ride”—for its breathless and suspenseful narrative.”

Libby’s life hasn’t been an easy one. All she’d wanted was a happy marriage and a family and she got both—briefly—but not in the order she expected. The marriage was spoiled because she couldn’t have children. That was solved by finding a surrogate to have her husband’s child, though they had to go to another state because paid surrogacy is illegal in New York.

Nevertheless, the happy family didn’t pan out because Mason left after the baby was adopted.

“Mason left when Ethan was six months old. Said he couldn’t handle it, couldn’t be part of their lives anymore. After all they’d been through to have this child, he ran away.

“I can’t do it, Libby. I can’t pretend this thing isn’t hanging over us.” He turned to the door, put his hand to the lock. “I could’ve turned you in. Just remember that, when you’re cursing me for leaving. You remember I could’ve told them what you did.”

Libby becomes a single mother, returning to her writing for solace and that’s where things go right. Now she and three-year-old Ethan are taking a little vacation to celebrate the publication of her first novel.

It’s at the resort that things become a nightmare.

“Libby turned and saw him inside the open elevator, laughing as he hit one button after another. She called after him as she ran. The doors came together and she saw him turn to look at her before they sealed her out. And then he was gone.”

When the doors open again, the elevator’s empty, and Ethan is nowhere to be seen.

Security cameras at the hotel show a woman with the child, a woman who looks like Libby. She’s Anna Lenihan, the surrogate mother who gave birth to the child Libby and Mason paid so much for, and she’s come to claim her son.

“The policeman appeared at the turn of the stairs, his pistol drawn. “Give me the boy,” he said.

“No,” Anna wrapped her arms tighter around Ethan.

“Who am I?” Anna echoed. She smiled and kissed Ethan’s cheek. “I’m his mother.”

What appears to be a simple kidnapping by a woman attempting to reclaim the baby she carried for a childless couple is going to turn out to be anything but.

This story has so many twists and turns, the reader will be dizzy before it’s over. This one is guaranteed to keep anyone opening its pages on the edge of his seat for the entire reading.

Opening as Anna is confronted by police as she stands on a rooftop with Ethan in her arms, the story is told partly in flashback and partly in the moment of the attempted kidnapping.

Libby’s personality is explored and explained, that of a woman who believes her life will only be complete if she has a child, a woman who will go to extraordinary, even desperately dangerous lengths to make it happen, only to discover her maternal desire has ruined everything.

Anna, her physical double, a woman never considering having a child, is driven by circumstances to become a surrogate. She is given as much depth of characterization as Libby, revealing how one small event—the detection of that flutter of life—can bring about a change of course that will bring about the tragedy involving both women.

Author Beck has written a novel leading readers down a specific path, guiding them into forming opinions about the characters that will eventually be turned upside-down as he reveals that everything has been viewed from the wrong angle. Following the shocking revelation of Chapter 49, every idea and opinion about the characters from husband Mason to little Ethan himself will be discovered to be shockingly incorrect.

This one truly deservs the accolade of that reviewing cliché—the “roller coaster ride”—for its breathless and suspenseful narrative.

Lost You is the kind of story that the reader will want to discuss with fellow mystery lovers. It will linger in the memory for days to come.