Lost in the Valley of Death: A Story of Obsession and Danger in the Himalayas 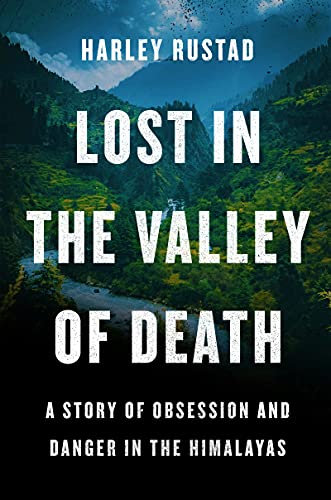 “Lost in the Valley of Death is a disturbing book that leaves you with a sense of wonder and a sense of unease. It’s a book that is not easy to put down.”

Lost in the Valley of Death is troubling on several counts. It tracks the life story of Justin Alexander Shetler, an adventurer and seeker whose compulsive questing led to his disappearance in a remote sacred valley in India. The author, Harley Rustad, carefully traces Shetler's path from his childhood and upbringing through his numerous shape-shiftings to his final trek to an alpine lake in the Himalayas in company with an Indian ascetic who professed to be a shadu, a holy man.

Along the way, Rustad locates and interviews Shetler's parents, teachers, friends, and fellow adventurers in an attempt to probe the sources of his relentless seeking. The reader is carried along through the tale, tugged by curiosity about what it is that Shetler is seeking, and why he is unable to find it. A plausible answer is given near the end of the book, after Shetler and the shadhu have arrived at the lake. Rustad then discloses vital information from Shetler's childhood that he has deliberately withheld from the chronological narrative in order to generate suspense.

This information casts Shetler's's story in an entirely new light and makes his pathological restlessness understandable. But withholding it is manipulative, and breaks Rustad’s faith with his reader, a faith based on trust that a biographer will share with the reader what he knows about his subject when in the course of his investigation he knows it.

Had we been given this revelatory information at its actual moment in the chronological narrative, Shetler's story would still have been compelling, but for a different, more profound reason. For Shetler is an archetypal figure whose bloodline flows back to Odysseus, the perpetual wanderer in search of home who was punished by a god whose temple he had violated. Violation is at the heart of Shetler's story, and knowing this from the moment it occurred would only make his search more poignant. As the story stands, the reader can only feel somewhat shorted, denied the opportunity to participate more fully with Shetler in his anguished search.

Nevertheless, this objection does not detract from the scrupulously thorough process Rustad has followed in retracing the steps of Shetler's path and arranging them in a powerful narrative.

Shetler was born in Sarasota, Florida, in 1981. His father, Terry, was a carpenter who became a student of Eastern medicine. His mother Suzie worked as a teaching assistant. Early in his life Shetler showed an interest in nature and in the stories of quasi-mythic men whose survival skills and fierce independence enabled them to live outside the boundaries of mainstream society. Shetler looked up to these heroic figures and aspired to become one. His favorite movie was The Last of the Mohicans, whose protagonist, Hawkeye—a white man who possessed the natural wisdom of indigenous people—became an exemplar for him.

Shetler's parents divorced when he was 11, and in Suzie’s custody he moved frequently—to Montana, then to Oregon. His interest in nature flowered there and, combined with his readings in Laotse’s philosophy of Tao, brought him into a spiritual relationship with the natural world. He came to believe that the deeper he went into nature, the deeper he would go into himself. Another important influence on Shetler during his adolescent years was Tom Brown Jr’s memoir of his tutelage by an Apache warrior named Stalking Wolf.

Shetler dropped out of high school when he was living in Oregon to attend a Wilderness Awareness School in Washington that had been founded by a protégé of Tom Brown Jr. He then went east to attend Tom Brown Jr’s Tracking School in the Pine Barrens of New Jersey, where his survival skills were sharpened and his spiritual connection to nature deepened.

This training prepared Shetler to become a seeker, a man whose life is devoted to the quest for meaning and self-understanding. In pursuing this quest, Shetler adopted several roles before making the quest a way of life as a vagabond and wanderer, ever restless, ever on the move. He worked briefly as a wilderness instructor, performed as the lead singer in a successful rock band, and became independently wealthy marketing for a tech start-up. He then resumed his wandering.

His path led to Southeast Asia and India. He studied martial arts and became a Buddhist monk. He also opened social media accounts and blogged about his travels, attracting a large following of people who admired his courage and daring, and who lived out their fantasies of adventure through him. Those who met Shetler on his travels and befriended him suspected that he was performing his life for this audience in an attempt to transform himself into his mythic ideal—the Hawkeye figure.

Shetler's final journey was to the Parvati Valley in India, Rustad’s valley of death, so named because of the numerous adventurers who had entered the valley but never returned. Shetler planned to go to this valley, live in a cave, and leave all traces of civilization and himself behind. He posted this intention on his Facebook page before setting off—and was never heard from again.

In recounting Shetler's journey to oblivion, Rustad presents the reader with two puzzles, and solves neither of them, perhaps because there is no solution. One puzzle is Shetler's motivation for living the life he led. Why was he never satisfied? What was he in flight from? Rustad offers numerous conjectures about Shetler's psychological state, but leaves it to his readers to form their own conclusions.

The other puzzle that remains unanswered is Shetler's fate. He hiked to a sacred lake in company with a sadhu, an Indian holy man, and never returned. Rustad tells the story of the search that followed Shetler's disappearance in meticulous detail, but reaches no conclusion, only more conjecture, from the scant evidence that exists.

Did Shetler accidentally fall to his death in the raging Parvati River? Was he the victim of foul play? Did he willfully disappear into a cave hidden in the mountains? Is he still wandering somewhere in the Himalayas? Again, it is up to the reader to speculate on Shetler's fate.

These uncertainties are deliberate, part of Rustad’s intent to give Shetler's life story the status of myth, which is the status that Shetler himself sought. To become a mythical figure is to escape who you really are, an easy trap to fall into in the age of the internet.

Lost in the Valley of Death is a disturbing book that leaves you with a sense of wonder and a sense of unease. It’s a book that is not easy to put down.