The Lost Civilization of Suolucidir 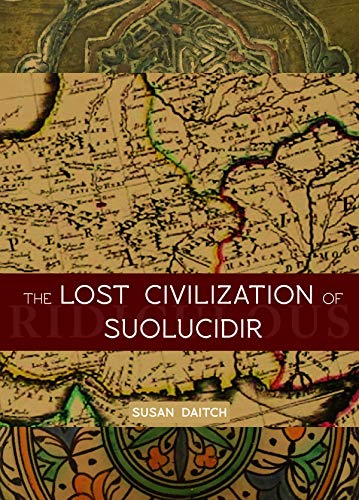 In eastern Persia a couple of millennia ago an earthquake buries a fictional city that legend has it was inhabited by descendants of the ten lost northern tribes of ancient Israel. Three generations of 20th century archaeologists in 1914, 1937, and 1979 respectively, set out to excavate the site located within commuting distance of Zahedan, the capital of Iranian Baluchistan near the current borders of Iran, Pakistan, and Afghanistan; each successive expedition seeks to build upon and expand the work of its predecessors. The identities and agendas of the members of the archaeological teams, however, are not what they first appear in Susan Daitch’s (Paper Conspiracies, also reviewed in NYJB) cerebral, satirical, and entertaining archaeological thriller.

The first expedition is cut short by the First World War, and the third coincides with and is aborted by the Iranian revolution and the founding of the Islamic Republic. In the first two expeditions the scientific research runs afoul of geopolitical machinations of imperial powers and the fact that nearby the archaeological site there is titanium and deep beneath the ancient ruins lies petroleum the extraction of which is incompatible with archaeological excavation. But mining and petroleum geologists are not above misrepresenting themselves as archaeologists or topographers to get a foot in the door; whether they realize it or not Daitch’s archaeologists are to mining and oil interests what artists are to gentrification.

Thus betrayal, marital as well as collegial, is a recurring theme for the novel’s mostly short lived characters who include doppelgängers and unreliable narrators. As for the subject of their research, spelling the eponymous lost civilization backward might reveal what the author thinks of her fictional ancient city and her characters’ quest to rediscover it. But the characters each have only a partial view of both the novel’s narrative arc and the city they are excavating, and as readers mentally assemble and reconcile conflicting versions of events the three expeditions become metaphorical layers in an allegorical archaeological site (the novel itself).

The first expedition is undertaken by a mismatched pair of Englishmen, Ryder Congreaves and Archer Hilliard, who meet at a London club for would be adventurers. Ryder is a chronically unemployed young married father, a Rhodesian raised and Oxford educated orientalist who speaks both Arabic and Farsi. Archer is independently wealthy and interested in archaeology.

Ryder brings expertise and Archer funding to their expedition. While waiting for permission to excavate in Persia they get their feet wet, or rather sandy, on an excavation in Egypt where Ryder begins an affair with Esme Canonbury, the wife of a diplomat.

After a series of adventures Congreaves and Hilliard reach and excavate their target site in eastern Persia. The few artifacts from that excavation that reached England are described in a 1986 letter by Congreaves’ granddaughter Tilda to American archaeologist Asher Bokser, who will figure prominently in the second half of the novel.

The second expedition is undertaken by a married couple who constitute the French half of the Franco-Soviet Friendship Dig. Bruno and Sidonie Nieumacher aren’t in fact French but are living in Marseilles illegally having fled there from Nazi Berlin where Bruno worked for a forger (an occupation that figures prominently in Daitch’s previous novel Paper Conspiracies) after they were expelled from the university because they were Jewish. The Nieumachers had earlier immigrated to Germany from Soviet Russia where they were originally Benjamin and Eliana Katzir from Grodno in what is today the northwest corner of Belarus. To explain their accented French they claim to be Alsatian Catholics.

In Marseilles Bruno’s former near eastern studies professor Dr. Feilor, a Lithuanian raised and German educated Jew, is now Shuki Fingers Feilor, a refugee black-marketer, property appraiser, and a well connected fixer. When the Nieumachers are approached by Mrs. Canonbury, who wants to sell a Persian artifact, they contact Feilor. And when French police are about to arrest and deport them back to Germany it is Feilor who gets them on a ship with forged documents headed for Iran by way of Alexandria, Cairo, Amman, and Baghdad as members of the Friendship Dig.

As a young man Feilor had been interested in the lost tribes, but as an aspiring academic in Berlin it was made clear to him that the topic was a career killer so he didn’t pursue it:

“The tribes are fixers, instigators, promoters of a longing for something perhaps never experienced; I turned my back on them and in exchange was rewarded with a professorship and a house on Oranienburgerstrasse.” To first person narrator Sidonie/Eliana:

“Trying to catch the lost tribes is like trying to pin down your own shadow, it seems to me, or the memory of a shadow. It looks like you but will always be elusive, can’t ever be captured, questioned, no dialogue can be engaged with it, but the nostalgia for this lost version can’t ever be gotten over.” As for her husband:

“Suolucidir was about forgetting, for enabling him to resume his old life in Berlin, to turn back the clock, to pick a universe parallel to the one we now seem to occupy. . . . Suolucidir means Bruno can put his hands over his ears and shut his eyes. Suolucidir is one big what if.” The opportunity for Bruno to work in his field may explain why the couple didn’t abandon the expedition once they were safely in Egypt and instead take a train to Palestine.

Whatever relief readers may feel knowing the couple have escaped France a few short years before the Shoah is tempered by the realization that their fates are now in the hands of untrustworthy Soviet partners. Gennady Pavlich Antonov and Ivan Sergeevich Bazymensky, archaeologists whose expertise is comically sketchy, meet them in Bagdad but do not continue with them to Iran. But two other Russians join and then shadow them in Iran, Darya Vasilisa Ulanovskaya and Maksim Petrakhov, who introduce themselves as surveyors working for the Iranian government. “Darya seems to be around every corner I turn,” Sidonie/Eliana relates.

Her narrative continues in the second half of the novel in the form of an excerpt from her journal that comes into the possession of the next first person narrator/protagonist Asher Bokser. This is a fortuitous juxtaposition since Sidonie/Eliana and Asher are the novel’s two most well developed and memorable characters.

They are also the ones with doppelgängers: in addition to Sidonie’s journal excerpt, a long letter addressed to Asher with a conflicting account of the 1937 expedition from someone who claims to be Eliana Katzir is quoted in full, and at another point Asher reads his own obituary.

Asher discovers the journal while sorting through his late geologist father’s belongings in the latter’s Miami home, and reading it he becomes bitten by the Soulucidir bug. Asher’s academic advisers and his fellow ethnologist/archaeologist wife Ruth Kopek echo Feilor’s advisers’ discouraging warning more than half a century earlier, but Bokser is ready to risk his career and his marriage.

Asher and Ruth’s marriage, to some extent like Bruno and Sidonie’s and even more so like Joshua Cohen the ghostwriter and his wife Rehava’s in Joshua Cohen’s novel The Book of Numbers (also reviewed in NYJB), fits the paradigm of the pragmatic wife impatient with her husband’s impractical obsessive vocational vision and career choice. The analogy with artistic vocations, such as writing post-modern literature, is obvious, but Daitch maintains aesthetic distance by jocular hedging: Soulucidir’s reverse spelling and Ruth’s sarcastic “Soul Disappear? Sole Sidur?” on the one hand, and Ruth’s Dickensian surname (kopek wise and ruble foolish) on the other.

Other humorous references include Mickey Katz’s comedic song Pesach in Portugal and Pez candy dispensers in the likenesses of the cartoon characters Boris and Natasha, which Asher imagines resemble Darya and Maksim and by analogy renders Sidonie and Bruno into Rocky and Bullwinkle.

Not only is Asher’s narrative—before, during his adventure excavating in and then escaping from Iran, and in the years following—engaging reading, but our first person narrator has more perspective with which to evaluate the work of the three excavations than did the two previous teams. Nonetheless, “There are days when the fact that I have nothing genuine remaining from the lost city, makes me wonder what it was I did find.”

Additional insights are shared by Esme Canonbury in an epilogue dated 1938 addressed to a few fellow tuberculosis inpatients at a Swiss sanitarium, which brings the story full circle back to the first expedition, a formal device Daitch executes more successfully here than in the short final section of Paper Conspiracies. Overall Paper Conspiracies has greater gravitas, but both novels successfully achieve their objectives.

After reading The Lost Civilization of Suolucidir readers will want to start over again to see what details they may have missed the first time through, and yes, this richly crafted and handsomely written novel rewards rereading. It also demonstrates that an ironic post-modern novel of ideas can be suspenseful and include complex characters readers can care about while feeling powerless to alter their fates.