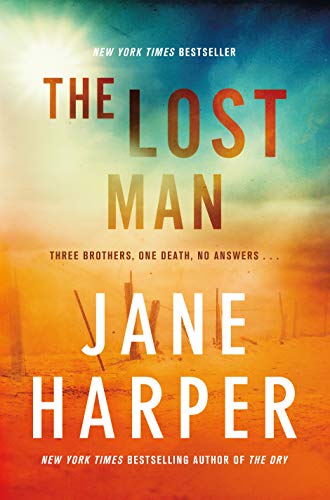 Many readers in this quadrant of the globe have discovered Australian crime fiction—mysteries, thrillers, police procedurals—through television series created for broadcast and streaming services. True, much of this has been lighter fare, like Dr. Blake and Miss Fisher, but there were also middle-brow, original shows like Janet King. Some series have been based on well-reviewed authors, like Peter Temple’s Jack Irish, Liane Moriarty’s Big Little Lies and Nine Perfect Strangers, and Chris Uhlmann and Steve Lewis’ Secret City.

By contrast, Jane Harper, sometimes described as “the queen of Australia’s Outback mysteries,” has reached American readers largely through the strength of her writing. Her breakthrough novel, The Dry, won Australia’s Ned Kelly Award for best first crime fiction, and the Victorian Premier's Literary Award. It became a worldwide bestseller, and Harper is now published in 35 countries. Inevitably, The Dry is also headed for the screen, in a feature film starring Eric Bana. The BBC’s Radio 4 has already serialized an abridged, audio version.

In The Lost Man, her latest outing, Harper lives up to her royal title. It’s a reviewer’s cliché, and an overused one at that, but Harper, through her lyrical, descriptive prose, does make the outback the novel’s central character: a vast, treeless, gritty, and ultimately pitiless expanse.

But not one without great beauty, as the former journalist learned through extensive, on-the-ground research.

On a hilltop, Nathan, whose point of view informs the narrative, “could see the distant shadows as the odd herd of cattle wandered along. They were tiny. The other way, to the west, all was still. The desert looked pristine and untouched, with perfect ripples in the sand. Nathan had seen the landscape so often and in so many ways, he was almost blind to it at times, but sometimes, in the right light, it was still breathtaking.”

“Nathan sat on the porch watching the night creep in. The red from the ground and the sky bled into one until they both deepened to black,” in a place where “the horizon was so flat and far away it seemed possible to detect the curvature of the earth.”

Harper acknowledged to one recent interviewer for the website Shelf Awareness that for her, setting, characters and plotlines were equally indelible elements:

“All three evolve constantly while the novel does, so it's hard to say which comes first. I always know how the novel will end; often that's clearer to me than how it will start. It's also important to me that the setting is more than just a backdrop, so I aim to weave it in throughout the story and use it to help shape characters and their actions . . . The Australian landscape is such a gift for a writer. It has a strong presence and offers incredible variety . . . I thought a remote cattle station in the outback offered a beautiful--and brutal--backdrop for a story with a strong element of suspense.”

To another interviewer, this one for the site Goodreads, she put it this way: “As a writer, it offers such an incredible opportunity for a novel. It's such an animating backdrop to build a story around.”

The Lost Man begins when the dehydrated body of one of three adult brothers is found in the insufficient shade of a long-forgotten, cattleman’s lonely gravestone. Key characters include the area’s only regular police officer and his counterpart, an intuitive nurse. But it falls to Nathan, the oldest brother, to solve the mystery, which becomes as much of why-done-it, as a whodunit.

As expansive as the narrative canvas is, the domestic drama at the heart of the novel can at times feel insular and claustrophobic, with most of the action unfolding inside and around the family homestead. The novel also takes a while to gain traction. But as the momentum gains speed in the final chapters, secrets are revealed and assumptions confounded.

In the end, this is a compelling—if bleak—novel, one mostly about place.

For Nathan, the tale reflects its setting.

“He felt connected to the outback in a way that he loved,” Harper writes of her central character. “There was something about the brutal heat, when the sun was high in the sky and he was watching the slow meandering movement of the herds. Looking out over the wide-open plains and seeing the changing colors in the dust. It was the only time when he felt something close to happiness.”

Happiness for the reader as well.