The Lost Book of the Grail: A Novel 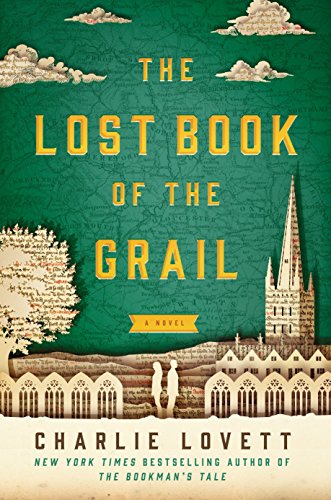 “The Lost Book of the Grail may send readers on their own searches for more Charlie Lovett novels.”

Once upon a time there was a little boy named Arthur Prescott whose grandfather gave him a book about King Arthur and his knights. His grandfather told him about the Quest of the Holy Grail and how Arthur was named for that king, and he hoped someday his grandson would find the lost holy treasure . . . and Arthur was hooked.

Arthur grows into a man who loves books, especially books about King Arthur. He collects them. A bit of an anachronism, he secures a position at Barchester University where he leads a happy life with a select group of friends. Though a confirmed bachelor, he’s socially content. In spite of being an avowed atheist, Arthur nevertheless appreciates the value of the Grail to the faithful, as well as the legends of St. Ewolda, whose now-missing shrine once existed at Barchester. He often longs to possess the faith so many others have.

Then he meets Bethany Davis, sent to digitize the ancient manuscripts of Barchester library, a brash American who loves to argue as much as he, and also possesses a passion for the Grail matching his own . . .

Soon Arthur and Bethany are searching for the Grail and St. Ewolda’s shrine together. Hand-in-hand, they discover clues in the most unexpected places and find the greatest treasures life has to offer.

The Lost Book of the Grail is a lovely story, almost fairytale-like in its presentation. It’s an easy read, written in a way making 50 pages go by in a flash. Light in presentation, there’s no sex or violence, but a very chaste love story with a cheery approach to a legend maintaining that fantasy quality.

Some of the dialogue could be straight from P. G. Wodehouse: bright, flippant, and amusingly sarcastic.  Though the explanation of polyalphabetic ciphers and codes may be a bit off-putting to some, their insertion doesn’t put a damper on the story, and the narrative of Arthur’s efforts to “crack the code” of St. Edwolda’s lost book is as intriguing as any spy novel.

The history of the fictional Barchester, integrated into the actual events of the Reformation, serve as the background for Arthur’s search, giving it an aura of authenticity. If there’s one complaint in the entire plot, one point of argument, it’s the fact of keeping the Grail hidden. In times when a reaffirmation of belief by proving one of the most famous objects of that faith actually exists would seem necessary, this isn’t done and no reason is given. Nevertheless, the other treasures Arthur and Bethany uncover in their search and in each other may be consolation against that fact.

Through it all runs the thread of Arthur’s determination to be the one to find the Grail, to fulfill that trust instilled in him as a child by his grandfather, as well as his one hope of some day being able to call that faith his own in spite of his disbelief. Flashbacks of those who became guardians of Barchester’s most trusted secrets fill in the blanks and answer the questions Arthur and friends pose in their discoveries.

Eventually, as with all the others who learn the Grail’s secret, Arthur will have to make a choice, to accept an unbroken chain of faith that has survived for more than a millennium. The decision is a difficult one for it involves sacrifice, giving up what wants for something better. Whatever choice he makes will be the fulfillment of a lifelong dream . . .

“The little boy who learned of the Grail at his grandfather’s knee could imagine nothing better.”

If author Lovett’s other novels are as entertaining as this one, they are to be recommended, sight unseen. As it stands, The Lost Book of the Grail may send readers on their own searches for more Charlie Lovett novels.