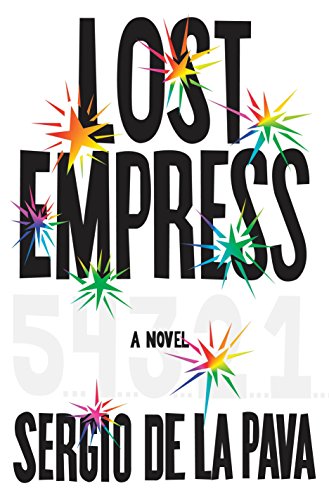 Sergio De La Pava’s Lost Empress begins with all the right things, interesting plot, smart dialogue, and punning wordplay but sadly, like a child’s letting go of an untied balloon, Lost Empress soon runs out of energy and falls.

Lost Empress is a pastiche that opens with entertaining verve and style. Author De La Pava breaks many novel-writing “rules.” For example, the prologue is followed by a “logue.” The first chapter is numbered “88” and every chapter thereafter counts down.

In a modus operandi of give the reader “everything but the kitchen sink” and “throw everything against the wall to see what sticks,” De La Pava next provides a slapstick stage play, followed with multiple digressions including inside-football jargon., inside-criminal-law jargon, and inside-medical jargon. For good measure there are any number of puns and clever wordplay, poetry, string theory, and the Multiverse. And last but not least, Lost Empress offers a paean to the discography of Joni Mitchell.

Lost Empress has multiple storylines and each chapter switches between threads, except for the last chapter that switches storylines at a near paragraph by paragraph rate. The first and principle character in the first storyline of Lost Empress is Nina Gill. Nina is the adult daughter and the capable manager (though a manager in fact, and not in name) of a premier NFL team. Nina finds herself cut out of her father’s inheritance when he gives official management of the NFL team to her brother, and as a consolation prize Nina is given her father’s Indoor Football League (IFL) team, the Patterson Pork. Nina vows revenge by making the IFL league world famous and the Patterson Pork national champions.

Through an unlikely series of events that hinge on a looming and then actual NFL strike, the only professional football will be the IFL, and Nina goes on a hiring spree. First, she hires a clueless but charmingly naive Girl Friday, who also serves as a sounding board by asking plot, football, and Joni Mitchell related questions, to which Nina’s answers provide a limited measure of context to the story. Nina’s hiring continues. The IFL gets on national TV, and the Patterson Pork is staffed with sidelined and retired NFL players, and managed by an alcoholic but winning ex-NFL coach.

Another storyline is loosely, (very loosely) based on a true historical event. Believe it or not, Salvador Dali once donated a painting to the Rikers Island prison complex in New York City—you can look it up in Wikipedia. The principle character in this storyline gets arrested and placed in Rikers for the purpose of stealing the Dali. He also serves the purpose of another storyline in seeking vengeance for a cousin’s honor.

However, in this storyline he provides the rationale for opaque criminal law references. This storyline also offers a copy of a prisoner “rule book,” presented as real-ish official document by use of a different font with typos and faded print intended to make it look like a copy of a copy. Though the rule book is interesting in and of itself, after being presented it is not referred to again in the story nor does its appearance further the plot.

There is also a faint yet significant thread of science fiction in Lost Empress as well, in the speculative physics of the Multiverse, the idea that a universe can end yet a similar universe in the Multiverse continue. The one significant conversation that touches on time, consciousness, quantum physics, and the multiverse is set in a mental institution, Bellevue. The point of this particular thread is the “spoiler alert,” so no more will be said by this reviewer on that subject.

It all sounds good, right? Well, no. Lost Empress is not satisfying for a number of important reasons: Though the premise and opening chapters do provide an entertaining explosion of wackiness and wordplay, the story and characters run out of steam, and the story essentially dulls and drags. There are a number of long and awkward sentences that break the story flow. There are too many football, criminal law, and medical references that cause the reader to pause and look up phrases that are essential to the context of the story, which again breaks the story flow. One could imagine a writer doing this for football, or law, or medicine but all three? This feels like intentional book selling suicide.

There is more to dislike. Every character is a “character.” Every character expresses their thoughts internally—in interior-dialog—and every interior dialog, whether the character is male or female, young or old, white or black, normal or quirky, has the same voice. Given the author’s limitation, to no surprise, the violence is well-detailed, but the love interests are presented as cardboard and cartoonish affection. The one redeeming feature of Lost Empress is, thankfully, its lack of any attempt of trying to depict explicit sex. As Harry Callahan once said, “A man’s got to know his limitations.”

This reviewer wanted to like Lost Empress, and did, but only the early chapters.