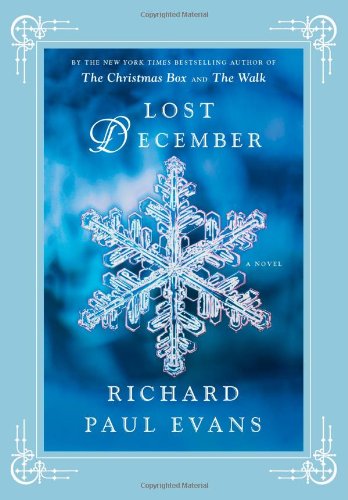 “Richard Paul Evans is a masterful writer who gets to the heart of friendship, family relationships, betrayal, and acceptance, making Lost December a heartfelt tale that is sure to stay with the reader long after the last page.”

Many young people think they do not need counseling or advice from their elders. They feel in charge of their own lives and want to live as they please. How often has a beloved offspring strayed from the flock like a sheep losing its way? What mistakes does one have to make to learn the meaning of parental love and acceptance?

Luke Crisp has led a sheltered life. An only child, Luke was raised by his father, Carl, after his mother’s untimely death. Sharing a strong bond with Carl, Luke often accompanies his father to work. Carl is the owner of Crisp’s Copy Centers, a national empire he built on a shoestring. He made his fortune by recognizing the potential in his employees and treating them as family; however, Carl’s biggest dream is for Luke to take over his position one day.

After Luke attains his undergraduate degree, Carl suggests he return to school for an MBA to be better equipped to run the expanding company. Though Carl hopes for Luke to continue his education in his native Arizona, Luke decides to attend Wharton in Pennsylvania.

Luke’s first weeks prove difficult, for he has never been away from his father. Discovering the bitter taste of loneliness, he is soon befriended by a group of classmates. They term themselves “The Wharton 7” and party often, enjoying the carefree life of young graduate students.

Luke gravitates to Sean, an obnoxious ne’er-do-well and falls in love with Candace. Away from his father’s influence, Luke drinks continually, often showing up to class hung over.

When Carl learns of Luke’s actions, he surmises his son will sow his wild oats, return to Arizona, and take over the corporate office after receiving his degree.

But Luke is malleable and further influenced by his new friends, especially Sean, who suggests the group grasp the golden ring and travel. Luke further disappoints Carl when, after graduation, he reports he will not take over the reins of the company, but instead chooses to journey throughout Europe.

Luke accesses his enormous trust fund, blowing his money jetsetting from one expensive European locale to another. Meanwhile, his relationship with Carl becomes more strained until it turns nonexistent. Before long, Luke suffers betrayal by those he has chosen to trust over his father’s love.

The biblical story of the prodigal son is very evident in Lost December. Richard Paul Evans is a masterful writer who gets to the heart of friendship, family relationships, betrayal, and acceptance, making Lost December a heartfelt tale that is sure to stay with the reader long after the last page.