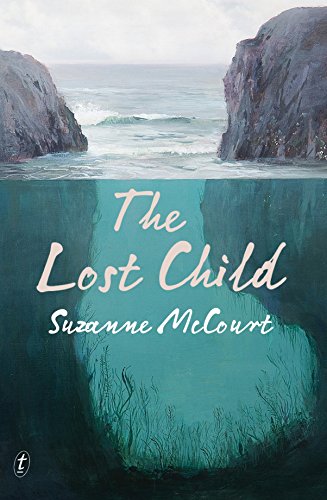 “What’s so good about the truth if it’s more awful than a lie?”

One could argue that every character in The Lost Child is in some way lost. The child who actually goes missing is Dunc, brother to the wise, albeit sometimes misguided narrator, Sylvie. Sylvie, five years old when she begins her story, lives in Burley Point on Australia’s wild south coast with her obsessive-compulsive mother, alcoholic and unfaithful father, and Dunc. Queen Elizabeth, recently crowned, is touring her far-flung Empire.

Readers who like poetic prose, a dark story (this one clocks in somewhere between onyx and jet), and deeply flawed characters will revel in The Lost Child, a quiet, deeply disturbing novel that reveals the generational nature of dysfunction and how secrets can destroy lives. The successful reader will have a high tolerance for ambiguity, as McCourt hints, tantalizes, and implies but rarely resolves.

Most readers understand that first person narrators are notoriously unreliable (and a five year old is not the exception to prove this rule). Some readers will cling to this literary chestnut, unwilling to believe that any child’s life could be as bleak and bruising as Sylvie reports. But Sylvie’s stoicism in the face of unremitting hardship makes us question our doubt. “What’s so good about the truth,” Sylvie asks, “if it’s more awful than a lie?” Dear God, say it ain’t so.

Sylvie spends a lot of time wishing herself elsewhere and readers might occasionally find themselves wishing the same as they turn pages hoping for some good to finally befall this child, her family, and Burley Point, a fishing village on the brink of economic collapse.

The questions mount; the crises continue. Why, Sylvie wonders at one point, doesn’t she have birthday parties like the other girls? Why does her mother still spoon-feed her when she’s old enough to do it herself? Why did her father burn their house down? And why do they pretend he didn’t? She concludes that, “Nothing makes sense. And then a terrible thought: What if there are no answers to anything?” Be forewarned, McCourt seems to be asking the same thing.

Sylvie learns early to swallow her hurt, uncertainty, fear, and anger, and this denial ultimately manifests itself in a bout of self-mutilation that will leave her scarred for life. Our narrator¾reminiscent of Francie Nolan, had Francie lived in southern Australia instead of Brooklyn¾loves books and words and retreats into her vivid imagination whenever events around her shift beyond bearing or comprehension. Which occurs often. She invents a superhero alter ego, The Phantom, to help her combat the powerlessness of childhood.

Happily for the reader, McCourt does grant Sylvie one true super power: the ability to invent dazzling metaphors. “I am a wombat in a hole full of hurt and hot air,” Sylvie thinks when her father, who will not so much as look at her, plays with her kitten Fluff. To Sylvie, gum trees wear “. . . swirling skirts of fairy mist,” and her brother’s scent is “. . . like a warm horse, like a smoky tree might smell.” Her Aunt Cele, a photographer, “finds sad eyes everywhere.” Sylvie describes her mother’s eyes, as “brown currant holes in a white cake face.”

Running in counterpoint to the poverty, despair, drinking, and emotional neglect in Burley Point are frequent references to the natural world: the sea, the swamp, the jungle, the mud flats that devour anything foolhardy enough to venture out, and the birds: magpies, silver eyes, eagle hawks, spoggies (sparrows), emus, and firetails. Even Sylvie’s dad¾a cruel, emotionally stunted man with broken dreams and a dark secret¾loves nature.

To mark the passage of time, McCourt references historic events: the inauguration and assassination of President Kennedy, Thalidomyde, the Beatles. By the end of the novel, Sylvie is 15¾chronologically. Emotionally, she has not advanced quite that far. How could she? Abandoned and seemingly despised by her father, infantilized by her mother, harangued by her brother and their school chums, mistreated by relatives, Sylvie grows older without quite growing up.

Aunt Cele, one of the few characters seemingly unaffected by the secrets, lies, and petty bigotries of Burley Point says, “. . . life is a riddle.” So is McCourt’s story. The author has a keen eye and ear for detail and the writing chops to deliver a tale as bleak as the winters in Burley Point. The Lost Child and its cast of lost children—Sylvie, Mick, Nella, Bullfrog, Pardie, Mrs. Winkie, Uncle Ticker, Chicken McCready, Mr. Sweet, Nobby Carter, and Dunc—will haunt readers long after they’ve turned the last page.