The Lost Boy: A Novel 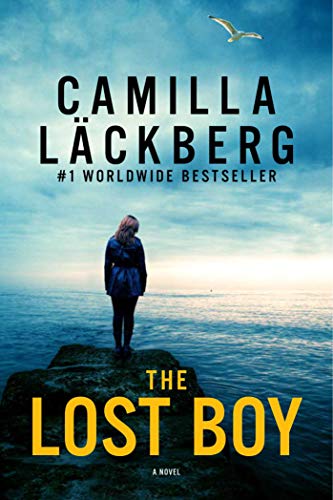 “The Lost Boy is a complex and brilliant novel, but is one of Lackberg’s darkest stories.”

Another masterpiece by Swedish author Camilla Lackberg, The Lost Boy blends police procedural with a ghost or two to illustrate the devastating effects of drug trafficking and domestic violence.

Patrik Hedstrom returns to work after a vascular spasm put him on sick leave with strict orders to avoid stress. Given the birth of twins by Patrik’s wife Erica; the car crash that killed the unborn child of Erica’s sister Anna; and the pressures of being a police detective, Patrik’s chances of avoiding stress are slim to none.

Also under considerable stress is Nathalie who flees to Graskar Island off the coast of Fjallbacka, carrying her five-year-old son Sam. “The night seemed endless. Everything had changed. Fredrik’s brown eyes had stared rigidly up at the ceiling, and she realized that there was nothing she could do. She had to save herself and Sam.”

Patrik’s first case after returning to work is the murder of Fjallbacka’ financial director, Mats Sverin. With no signs of forced entry, no signs of a struggle, no fingerprints but the victim’s own, and the fact that Sverin has been shot in the back of the head, Patrik concludes that the victim knew his murderer. The problem is that outside of his parents Sverin had no friends, and he didn’t associate after hours with his co-workers.

Sverin’s laptop is missing as well as a briefcase he always carried according to his co-workers. Since the town of Fjallbacka is a partner with developer Erling Larson in restoring a historic hotel, Patrik wonders if financial shenanigans are behind Sverin’s murder and the disappearance of his laptop.

An interview with Sverin’s parents leads to Nathalie, the victim’s childhood sweetheart. She is now living on Graskar Island, called Ghost Island by the locals. “According to legend, it was given the name because those who die out there never leave the island,” Sverin’s father tells Patrik.

Patrik interviews Nathalie who is devastated to learn of Sverin’s murder. “She didn’t say a word, but she was shaking uncontrollably, as if she might break into a thousand pieces right before their eyes.”

Nathalie admits Sverin came to visit her the night of his death, but left early. “He left sometime later that night. . . .The pain was as clearly etched on her face as if she’s screamed it out loud.” It is evident to Patrik that Nathalie and Sverin had made love, and that she is hurt that Sverin left without a word to her. He did, however, leave behind his briefcase and laptop.

Neither laptop or financial documents found in the briefcase are helpful, so Patrik concentrates on learning more about Mats Sverin. Investigating Sverin’s past leads Patrik to The Refuge, a shelter for women and children who are victims of domestic violence, where Sverin was a member of the staff. There doesn’t seem to be a connection between the shelter and Sverin’s murder, although Patrik learns that just before Sverin moves to Fjallbacka, he is badly beaten by youthful thugs.

“Patrik felt a sinking sensation in his chest. He’d had no idea that so many women were to flee their homes—and the only statistic he’d been given was for cases involving the Refuge, so that was just the tip of the iceberg.”

When three school children are hospitalized after tasting “candy” they found in the garbage outside Sverin’s apartment, Patrik thinks he might have found a connection between Sverin’s beating and his murder. The “candy” is cocaine. Is it possible Sverin was dealing drugs? “But the image that he’d formed of Mats Sverin after talking to his parents, his coworkers, and Nathalie did not fit with this new information.”

Bertil Melberg, Patrik’s boss and about as lazy and incompetent policeman as one could find, jumps on the possible connection between Sverin’s murder and drugs. Over Patrik’s objections Melberg calls a press conference and hints that Sverin was a drug dealer. The consequences are so devastating that even Melberg “for the first time in his life, he was forced to do some soul-searching.”

Lackberg emphasizes the pervasiveness of domestic violence by interspersing flashbacks of Emelie, a young housemaid in 1870, who marries her employer’s son, and moves to Ghost Island where her new husband and his assistant are in charge of the island’s lighthouse.

Once on the island her husband turns brutal. “His face was pale, and she saw that strange mixture of hatred and despair in his eyes as he raised his hand to strike her . . . If only she knew the reason for his agony and why she seemed to be the cause of it.”

Her only company who wish her no harm are the ghosts she first senses, then sees.

A young mother who flees to Denmark with the aid of the Refuge doesn’t know why her ex-husband enjoyed beating her, but he did. If she had not escaped Sweden, he would have killed her and maybe their children. When she receives a postcard from him, she realizes he knows where she is hiding. As is a common theme in abusive relationships, she believes that if she apologizes and begs forgiveness, they can be a family again.

Nathalie is also a victim of domestic violence, and even though her abuser is dead, she fears “they” will find her. Who “they” are is not clear, but Nathalie believes if she is found, her son will be taken away from her. Like Emelie before her, Nathalie sees the ghosts of those who died on the island and now cannot leave.

By the time Patrik sees the solution of Sverin’s murder, his wife Erika has gone to Ghost Island to visit Nathalie. In a horrifying conclusion, all the various threads of Sverin's life are woven into a tapestry of lost lives and futile hopes.

The Lost Boy is a complex and brilliant novel, but is one of Lackberg’s darkest stories.