The Lost Battles: Leonardo, Michelangelo, and the Artistic Duel That Defined the Renaissance 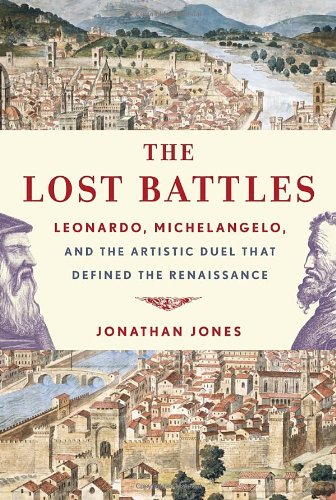 “. . . engaging and informative book . . . compellingly creates the world the two antagonists inhabited, replete with a cast of interesting and colorful supporting characters.”

In one corner we have the elegant and impeccable Leonardo Da Vinci in silk and velvet finery. In the other is the sinewy, scruffy Michelangelo Buonarroti in rumpled work-clothes covered in marble dust. The bell rings and the contenders come out . . . painting.

That the two late Renaissance artists didn’t get on with each other is well known, but in Jonathan Jones’s book, The Lost Battles, it is clear that their competition went far beyond disagreements about art. They took an intense and personal dislike to each other. He writes:

“Rumors of some vicious irreconcilable enmity between Leonardo and his younger contemporary started to circulate in Italy in the first half of the sixteenth century. Such a feud was bound to fascinate a culture in which ritualized vendetta as practiced as readily by artists as by aristocrats. . . . The story that the century’s two greatest artists loathed each other found a ready audience.”

Michelangelo goaded the older man for his inability to finish what he started. One of the insults hurled at Leonardo concerned a bronze horse that he had accepted as a commission and was unable to finish because of insurmountable technical difficulties. As a sculptor, Michelangelo found the failure indicative of the older man’s exceeding hubris.

For his part, Leonardo used his influence with Florence’s Great Council to cause Michelangelo’s “David” to sport a pair of bronze underpants, ostensibly as a matter of public modesty, which Leonardo cared little about. In truth, he just wanted to get under the upstart’s skin.

The subtitle is Leonardo, Michelangelo, and the Artistic Duel That Defined the Renaissance. That makes the book sound more academic than it is, for in its 368 pages of text, author Jones recreates for us the sights, sounds, smells and tastes of 16th century Florence, as noted for its burgeoning arts community as it was for its violent politics.

Florence had just cast off the rule of the Medicis and established a new republic. Its greatest threat was from its ancient enemy, the city of Pisa. Artists, who were also engineers and architects, were frequently called upon to justify their existence by creating fortifications and weapons. The fall of the Medici created a power vacuum that left the fledgling republic vulnerable.

To celebrate its new freedom, and inspire military readiness, the Great Council decided to commission a mural depicting one of their military victories, The Battle of Anghiari, on one wall of their chamber. The artist they chose was Leonardo. (In spite of the fact that his “The Last Supper” began to flake off even before it was finished because he decided to paint on dry wall instead of wet plaster, à la fresco. Michelangelo could have told him that.)

Leonardo had already established a reputation for taking his own sweet time on his commissions, his mind being always occupied elsewhere, and often left the works unfinished.

Enter one Niccolo Machiavelli, who was later in his life to pen the work that made his name synonymous with political intrigue and moral relativism. Knowing Leonardo’s reputation, he commissioned Michelangelo to paint The Battle of Cascina on the opposite wall in a move that was . . . well, Machiavellian.

In Florence, Jones reminds us, competition for commissions was the engine that drove the art world to excellence. Machiavelli knew that the council could either get one brilliant painting from Leonardo, should it even be completed, or by putting the two artists in direct competition with each other, they stood a good chance of getting two magnificent ones.

So why did the two master artists really detest each other? Was it simple competitiveness? No. Mr. Jones writes that it was a clash of personalities more than anything else.

Michelangelo saw the well coiffed and elegantly dressed Leonardo as an effete dilettante who paraded around Florence, with his entourage of assistants in tow, wearing rose colored hats and cloaks and pink tights, a man who dressed up in all his finery even to paint. Leonardo looked down on sculpture as a dirty, sweaty and plebeian pursuit.

That both were gay has been pretty much established, but while Leonardo was witty, exuberant and sociable, a meticulously observant scientist, anatomist and engineer, as well as being a suspected atheist, Michelangelo was celibate, poorly dressed, always covered in marble dust and chips, unsociable, slavishly focused on his work, and faithful to the church.

And how did their competition define the Renaissance and change the art world forever? Mr. Jones says it was partly in the way artists thought of themselves and how they were perceived. Artists had been considered nothing more than tradesmen, but during the Renaissance they began to think of themselves as godlike creators, and their art as divine revelation. Jones writes:

“They are ascending towards a higher conception of art—and a bigger one. Robust, absolute, universal figures replace the illustrative, imitative classicism of the fifteenth century. Instead of archeologically studying the remains of the ancient world, they are creating their own autonomous classical works whose spiritual ambition inspires awe and wonder.”

It must be noted that the competition between the two antagonists became something of a public entertainment. As the drawings were being created, long lines of citizens formed outside the Great Council chamber to see their progress. Other artists such as Raphael stood in awe as the rival compositions developed. It was followed as closely as a boxing match.

It was, however, in the technique and composition that the drawings were, and indirectly still are most influential. What was being created out of the conflict between the two masters is something that had never been seen before. In their obsession with outdoing each other, each pushed himself to the limits of his craft and vision. Mr. Jones says that echoes of Leonardo’s anti-war polemic are found even in Picasso’s “Guernica.”

Michelangelo’s cartoon depicted soldiers bathing in the Arno River, rising and grabbing their weapons to meet an impending attack. Very heroic indeed, and it gave him ample opportunity to celebrate his obsession with the male nude.

Unfortunately, as the title suggests, the cartoons that changed the art of painting so drastically are lost to us, indirectly available only as they are described by contemporaries and in the influence they had on artists who used them as templates for a new kind of painting. When the Medici regained power, all vestiges of the republic were destroyed, including the two drawings.

Jonathan Jones’s engaging and informative book is not just for historians or art aficionados. He has written a powerful drama illuminated but not overwhelmed by accurate historical detail, compellingly creating the world the two antagonists inhabited, replete with a cast of interesting and colorful supporting characters. It is a perfect arena for the conflict of genius that plays out in a small room in Renaissance Italy, a clash of personalities and motives that propels us as surely as any well written novel, straight through to the final page.