The Lost Art of Mixing 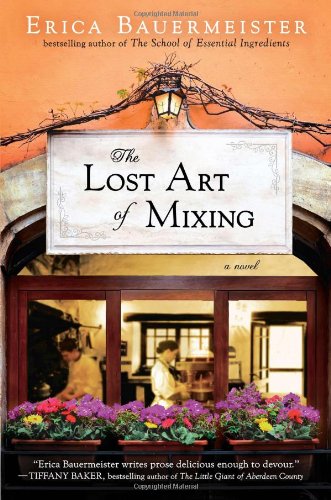 Readers who devoured Erica Bauermeister’s The School of Essential Ingredients will be happy to rediscover some familiar characters in The Lost Art of Mixing. But this sequel does not merely pick up were its predecessor left off; it is less about food and more about its heartfelt cast of old and new characters.

There is Chloe, reeling from heartbreak and afraid to trust; Isabelle, with a lifetime of wisdom to share, but slowly losing her past; Finnegan, fading into the background in spite of his unusual height and crush on Chloe; Al the accountant with his devotion to ritual; and Louise, Al’s resentful and unhappy wife. Tom is back, too, and his life has taken an unforeseen turn.

Lillian, foodie and restaurant owner extraordinaire, is again the essential ingredient linking the others, but here readers are treated to a new side of Lillian. She is less the almost but not quite supernatural fairy godmother of cuisine and more flesh and blood, facing life’s unexpected twists in real terms, without the seemingly mystical power to solve everything with food.

Unlike The School of Essential Ingredients in which a cooking class is what the characters have in common, the bonds connecting the characters in The Lost Art of Mixing run deeper, adding texture and realistic complexity.

The point of view shifts with each chapter, telling each character’s personal story from the inside out. At times, this creates the feeling that this is more a series of linked short stories than a novel.

Ms. Bauermeister’s prose is vivid and transparent, her characters are memorable, and she provides just enough of a thread between them to keep the plot moving forward and provide a satisfying read.