The Lost and Found Bookshop: A Novel 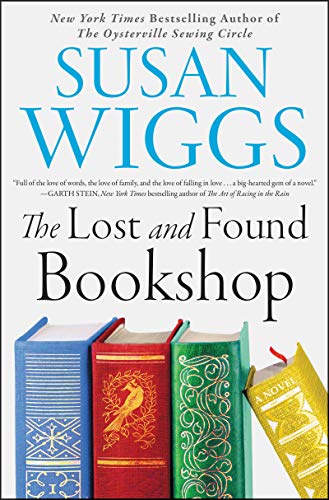 Natalie Harper hates her job at Pinnacle Fine Wines in Sonoma County, California, but the pay and benefits are worth it. Raised by her single mom, Blythe, and her grandfather, Andrew Harper, whom she lovingly calls "Grandy," Natalie is being feted at the winery with a promotion. Panicky and hating attention, she eagerly awaits Blythe's appearance, knowing Blythe will ease her nerves. Her current beau, Rick, a pilot, can't get away, which puts a bit of a damper on the day, but in retrospect, Natalie believes their relationship is about over.

After a speech and a toast, Natalie receives an email stating the mega-million deal she managed for the company has hit a snag. In a panic, she rescues the situation but drenched in nervous sweat and red wine someone had spilled on her, she goes to the ladies' room to regroup. While in a stall, her two employees enter and start criticizing her. Somewhat ill, she exits the restroom after they leave, hoping her presence was unknown. Is she as bad as they let on? How could they despise her so much?

Thoughts erupt about her failing relationship with Rick and the job she's grown to hate, making her wonder what she should do about her life. After the event, she visits her friend, Tess to take her mind off things, while mentioning Rick as well as her sadness about her mom's absence.

Driving home, the radio announces a plane crash. Realizing it is one from Rick's company, she heads to the airport where she gets the news it was Rick who went down. Learning he had a woman with him she is devastated to find out both occupants perished. The unthinkable comes to light when she hears Blythe was with Rick for, they both were hoping to surprise her at her commemoration.

How can she exist without her mother? She's distraught about Rick but losing her mom is devastating. She must head to San Francisco to the Sunrose Building, their home and store, The Lost and Found Bookshop"= to attend to business and alert her elderly grandfather recently diagnosed with dementia.

Moving into the apartment above the shop Natalie realizes how good it feels to be back in the city and the old historical building housing the bookstore and her childhood home. Sitting on the front stoop, a workman approaches, believing she is homeless. Introducing himself as "Peach" Gallagher, he says he was hired by Blythe to do some repairs.  When Natalie informs him of her identity and Blythe's death, his pity turns to desire to help her.

Feeling Blythe's presence everywhere, Natalie’ grief turns to irritation after checking the books and seeing they are deeply in debt. Nearing foreclosure, the store may have to be sold, though this has been Grandy's home his whole life, as well as her mother's and hers. Grandy soon will need constant care, so she may have no choice.

A scene from Grandy's doctor's appointment:

"Andrew glanced over at Blythe. Her exceedingly pretty face was puckered with worry. 'I hate being a bother,' he said.

"'Grandy, you're not a bother. You're the best person I know and always have been.'

"He was not a bother, and she was not Blythe.

"He felt a sharp pang of sadness because his daughter was gone. His grand- daughter had come to manage things, and she had discovered that the shop was in trouble. Crushing debt and back taxes. She believed the only way to survive was to sell the shop and move away forever. What Natalie didn't understand, what he hadn't been able to make her see, was that they couldn't sell the shop—at least, not until they found the lost treasure."

Grandy will not consider selling for he believes a mysterious treasure is secreted somewhere on the premises from long-lost relatives:

"It was a family joke that Grandy's father, the old Julius Harper, believed there was treasure in the Sunrose Building. According to Grandy, Julius's mother had hidden something, and then she died in the 1906 earthquake and Julius went to an orphanage, and the treasure was lost forever. Grandy had grown up hearing stories about it, but they were just that—stories."

Natalie speculates Grandy's dementia has him believing this, forcing him to hang on to his cherished abode. She learns he, not Blythe, is the deed holder, and she cannot sell without his consent, so now she must find a way to bring in revenue and keep the bank and vendors at bay in addition to making repairs.

The historic building offers the description as this:

"The upper apartment featured graceful old-world details. There is an unusual high peaked ceiling under the front gable, a sport where Natalie used to lie on the antique chaise, watching the sunrise over the part. The old arched windows, hardwood floors, Gothic flourished, and marble fireplace harkened back to the building's origins—a saloon downstairs, and a rather high-end brothel up, with a big old-fashioned bathroom at the end."

Peach tells Natalie his daughter Dorothy loves the shop, and one afternoon she pops in excited to buy some books. Natalie, taken with the precocious and lively child, knows she is what she needs to chase away her gloom.

Peach, not only handsome, but compassionate, wants to help Natalie. Enchanted by his presence and by the caring way he treats Dorothy and Grandy has Natalie caring for him even more. Peach befriends Grandy imparting his real name is "Pete," but he got the nickname in the Marines when his troop learned he grew up in Georgia, and the name has stuck. Though Natalie is attracted, being Dorothy’s dad means he's married, and she is not a homewrecker.

Anxiety and tensions mount with the strain of mounting finances until Natalie learns Dorothy has written to her favorite author pleading with him to do a book signing. Pleasantly surprised, Natalie understands this busy man is hard to pin down, but he eagerly agrees, and his appearance is a big success. In addition, he seems smitten with Natalie, and he takes her on exciting dates. Natalie concludes he is out of her league, as he is rich and famous, and though she can't help it, her heart is tied to Peach.

The many characters in this novel are well-fleshed out and lovely descriptions enhance the prose. "Peach trolled the block, looking for a place to park near the bookstore. It was raining. The wet, slick, chilly kind of rain that slapped like an insult—and the nearest spot was half a block away. The walk through the pissing weather made him wonder why he had bothered with a morning shower."

"Then she stood in front of the closet and regarded the empty space. There was one long, deep shelf up high, and a closet rod that sagged in the middle like a sow's belly, hangers swinging like bird bones."

Susan Wiggs, the author of several novels, continues to enchant her readers with mystery, romance, and undeniably good writing. Experiencing emotional angst while rooting for the protagonist through her many troubles, the reader will find the much welcome conclusion is heartfelt and sincere.