Lost and Found Sisters: A Novel 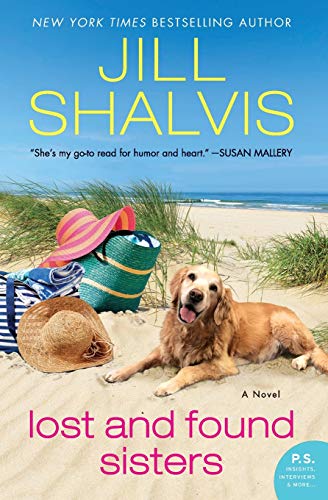 Jill Shalvis can write a pretty good sex scene. That’s important in chick lit, which relies heavily on men who can kiss with “a slow, melting nuzzle of lips that was at once perfect and not nearly enough,” like Mick Hennessey, a San Francisco engineer and the hunky love interest in Shalvis’s newest novel, Lost and Found Sisters.

This book is supposed to mark a move upscale in genre, from romance to women’s fiction, for Shalvis, who claims to have churned out over 50 novels —some of them bestsellers—since 1999.

The hammer-drop that sets off the narrative occurs when a lawyer tells Quinn Weller, the requisite spunky heroine, that her mother has died. Not the mother Quinn has known for all of her 29 years; rather, this is a woman named Carolyn Adams who gave Quinn up for adoption at birth—a detail that Quinn’s adoptive parents never wanted to tell her.

This shock, moreover, comes two years after another blow, the death of Quinn’s younger sister, Beth, in a car accident. To cope with that pain, “Quinn had purposely backed away from any sort of emotional attachments because she couldn’t open up her heart like that again, she just couldn’t.”

Carolyn’s death brings one more surprise: Quinn has a 15-year-old sister, Tilly, living in the small (and fictitious) Northern California town of Wildstone. Because their mutual father long ago left Carolyn to join a traveling rodeo, Tilly really has no one to take care of her except Quinn—a responsibility that thrills neither of the two newfound sisters.

Quinn wants to return to her no-surprises, no-feelings life as a sous-chef at “a trendy, upscale restaurant” in L.A. Tilly wants her mother back, or failing that, basically no parental supervision.

Yet Quinn quickly realizes, “she’d already lost one sister to tragedy. She didn’t want to lose another to cowardice.” So she stays in Wildstone—for a “trial period”—to see if she and Tilly can get along and also to revive the (decidedly untrendy) café Carolyn had owned.

If Tilly is willing to accept Quinn as her legal guardian, Quinn’s plan is to bring the younger girl with her back to L.A.

Through all of this, Mick has been shuttling back and forth to Wildstone to help his newly widowed mother clean out and sell her house. He meets Quinn on her first day in town, while she’s having a quick panic attack on the sand dunes that are one of the few tourist attractions in the fading ex-mining, ex-logging town.

Mick and Quinn both tell themselves that their sexual fireworks are temporary, because neither of them has any intention of staying in Wildstone. He will return to San Francisco and she to L.A., 400 miles apart.

Of course, nearly every strand of the happy ending is obvious from page 67.

Like Quinn, Shalvis deserves credit for stretching beyond her comfort zone, even though she falls short.

For instance, Lost and Found Sisters darts at two substantive topics: local government corruption (one of too many subplots) and the complexities of adoption. Yet in the end these topics get less attention than the physical infirmities of Mick’s dog and Quinn’s cat.

Repeatedly mentioning Quinn’s emotional deep freeze does not equal character depth. Pushing Mick away a half-dozen times for no good reason does not build suspense. If Shalvis trimmed those page-fillers—and, yes, got rid of about half of the sex scenes, well written or not—Lost and Found Sisters could indeed be an upscale version of what the author has written so successfully: a lively and page-turning story of people we care about.