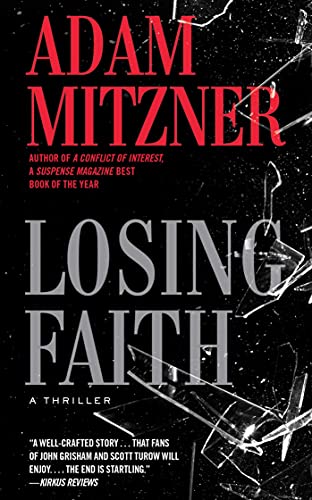 “Mitzner provides a surprise ending that will leave fans gasping in shock . . .”

A legal thriller/courtroom drama that asks the questions: Is career more important than family? What will you do when the two collide? What will you sacrifice for a second chance at happiness?

Aaron Littman, one of the country’s most respected defense attorneys and chairman of a prestigious New York City law firm, is figuratively on the top of the world in his 57th floor office. Wealthy, successful, happily married with two teenaged daughters, his life is back on track after an ill-advised affair with federal judge Faith Nichols, which he believes has ended without anyone, including his wife, ever knowing it happened. An affair between the two is a breach of ethics for both; discovery would ruin their careers.

Faith Nichols is not thinking of Aaron or the end of their affair, but of the case she has just been assigned. “It’s the very last thing in the world she wants.” A bench trial, meaning a trial before the judge without a jury, with the defendant being Nicolai Garkov, a Russian accused of money laundering and funneling cash to Islamic terrorists, places Faith in a place she doesn’t want to be. The public demands a conviction even though Faith senses that the prosecution’s case is weaker than the U.S. Attorney wants to admit.

Public opinion isn’t the only pressure pushing Faith into a corner. As the aide to New York’s senior senator tells her: “I’m here solely to apprise you that if Nicolai Garkow is convicted before July fifteenth, you’re going to be nominated to the Supreme Court of the United States. Any other result, and you’re not.”

The choice could not be more clear: convict and become a Supreme Court Justice; acquit and “. . . you become the judge who let a terrorist go free.”

Unknown to Faith, her choices are not simply to acquit or convict; life is seldom that clear-cut. Nor will Aaron’s self-assurance that his secret affair is behind him with no ugly repercussions such as a divorce or disbarment last in the face of imminent revelations.

As Adam Mitzner makes clear in Losing Faith, a cleverly ambiguous title, there are always consequences to bad choices. While confession may be good for the soul, in the real world it is seldom good for one’s career or marriage.

Aaron’s consequences begin with a visit from Nicolai Garkov’s current attorney, who tells Aaron that Garkov wants to retain his services as counsel for his upcoming trial before Judge Faith Nicholas, and he wants an immediate meeting. Aaron refuses, citing the financial damage his firm would incur from the loss of business from their many banking clients, but he knows he is putting off his own capitulation. “He’s known for the last five minutes that he is ultimately going to meet with Nicolai Garkov.” He’s known it ever since the Russian’s soon-to-be ex-attorney mentioned Faith’s name.

Ethics and morals aside, blackmailing a federal judge is a crime, so Aaron hopes Faith will recuse herself when she learns Aaron is Garkov’s attorney. Faith does not, and Aaron must face his law firm’s senior partner, Sam Rosenthal. “. . . so it’s time for you to tell me exactly what the hell went on between you and Judge Nichols, and how much of that Nicolai Garkov knows.”

Aaron confesses to Rosenthal, feeling relief but also shame. Aaron knows he has failed the New York Times test that is part of his orientation for first-year associates. “He tells the newly minted lawyers that everything they do professionally should be governed by one simple question: How would they feel if their actions ended up on the front page of the New York Times?” Aaron knows he has failed not once, but numerous times.

As a last resort Aaron arranges a late night meeting with Faith to tell her about the blackmail and Garkov’s threats against both their lives, but Faith is angry, not frightened. “Garkov’s your problem, Aaron. Get Sam Rosenthal to fit it. That’s what he does, right? But whatever you do . . . just leave me out of it.”

Faith is indeed left out of it. Her body is found the next morning, but no weapon, no forensic evidence at all, nothing to point to her murderer.  Lack of forensics is no problem for U.S. Attorney Thomas J. Fitzpatrick and his pit bull of an assistant, Victoria Donnelly, not when Nicolai Garkov shares his knowledge about the affair between Aaron and Faith. While Aaron may have thought using burner phones and paying cash for hotel rooms, so nothing suspicious ended up on his telephone or credit cards bills, his subterfuge is uncovered.

Aaron is arrested and charged with Faith’s murder. “Of all the insincere gestures known to man, prayer by an agnostic has to rank right up there.” And yet, that’s what Aaron does. Silently, he asks for forgiveness and pledges to be a better man, a better father, a better husband, if only he’s given the chance.

Losing Faith resonates with the behind-the-scenes realism that only an author who is a practicing defense attorney can bring to fiction. Mitzner opens the conference door to reveal manipulations, threats, lies, and unethical behavior that swirl around in the murky waters in which both law firms and the criminal justice system too often swim. Certain characters are stereotypical examples of this, U.S. Assistant Attorney Donnelly being one. She is a shark who smells blood in the water, and to whom winning is all.

Losing Faith by Adam Mitzner has all the plot twists required of a legal thriller, as well suspenseful courtroom scenes. Most importantly, Mitzner provides a surprise ending that will leave fans gasping in shock and wondering how they missed the vital clues.