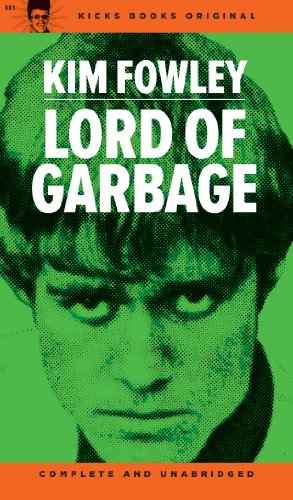 “No one is sure Who Put the Bomp, but Kim Fowley may have walked it to the door on its way into history.”

Written with the furious, unforgiving pace of a Benzedrine addict in the throes of sweaty delusion, Lord of Garbage makes you hear the crackle of a neon sign blinking outside of a squatter’s hovel as Kim Fowley pounds out one maniacal observation after another.

Lord of Garbage has absolutely no problem living up to its title. This is the type of book that ages ago you could only find on the paperback spinner rack of a 1949 Greyhound Bus Station. And even than you had to know the guy behind the counter to get a copy because something like this book certainly could be displayed next to John Steinbeck or even Mickey Spillane.

It is foul, profane, and filled with braggadocio that often defies reality and seems to come from the same space once occupied by the hipster ideals of Kerouac or Ginsberg. For author Fowley reality isn’t a fevered dream or speed-driven drive across country. This is the mangled cry of someone who has just flat-out seen too much and knows what true ugliness looks like.

Mr. Fowley has created a completely demented, often disturbing, and crazily enjoyable version of the already fractured reality of Hollywood. Only the depravity he chronicles comes from first hand observation. Because it’s about Hollywood, both as an idea and as a town, it is full of celebrity cameos from John Lennon to John Garfield and over to Jan and Dean.

Born in 1939 to “actor” parents, the author came out of the womb nearly ready to speak in complete sentences and with an innate understanding that he was going to have to get through this lifetime with little if any help from anyone. Over the years he is periodically abandoned by each of his parents only to find himself in a foster home. There he learns to fend for himself with fists, his wit, and a stunning amount of highly confrontational arrogance.

His description of his parents is absolutely merciless. Their narcissism and neglect accurately convey the pointless obsessions behind much of Hollywood dream factory. Much of what he writes is an insightful and shockingly disruptive portrayal of Hollywood after the war.

Exposed at a very early age to drugs, sex, money, disturbingly manipulative behavior, riches and poverty, Mr. Fowley never once apologizes for what he has to tell us.

After a stint in early gangs of L.A. and a subsequent spell in the armed forces, Mr. Fowley emerges into the sunlight of L.A. only to find the darkness of back rooms and anonymity that a hundred different addresses can provide are his real stomping grounds.

A hustler by birth and a good one by both training and design, Mr. Fowley makes his way into the music industry. There he becomes a legendary producer, a hit songwriter, and a driving force on the L.A. music scene. He crosses paths with Frank Zappa, P. J. Proby, Cat Stevens, Nancy Sinatra, and The Byrds and works with Lou Adler, Berry Gordy, and Alan Freed.

His behind the scenes stories of the famous “nice-guys surf-duo” Jan and Dean will make you cringe with disgust. And Mr. Fowley is proud to do that for you.

As his life rolls along Mr. Fowley has chosen to include various verses and long poems that serve as a near-Greek chorus for the action. Since he has had decades of experience as a songwriter and lyricist, the idea is only fitting. At times the verse can enhance what he has to say. But occasionally they do distract from the momentum of his story.

One telling verse revels more about Mr. Fowley than almost anything else:

compromise
is worse than the battles
that have been
lost.

Spoken like a true hustler—and the Lord of Garbage.

This is just the first third of his life. Two more volumes of Lord of Garbage are scheduled to appear shortly. As evidenced by his writing in this, the first part of his tale, Mr. Fowley spares no one when it comes to his skewered and often hilarious take on his opening salvo in life. Next up, his place in the formation of one of the most important girl groups in history, The Runaways.

In true form to the classic paperbacks of the late forties and early fifties, Kicks Books includes a few pages at the end that offer related titles and products. The best idea is from the Necessary Novelties category. Who wouldn’t want a special perfume called “Garbage”?

If you love rock and roll, the shadows of a fifties bus station, stories of an unapologetic degenerate, or the idea that fairness has little to do with life—then this is the book for you.

No one is sure Who Put the Bomp, but Kim Fowley may have walked it to the door on its way into history.