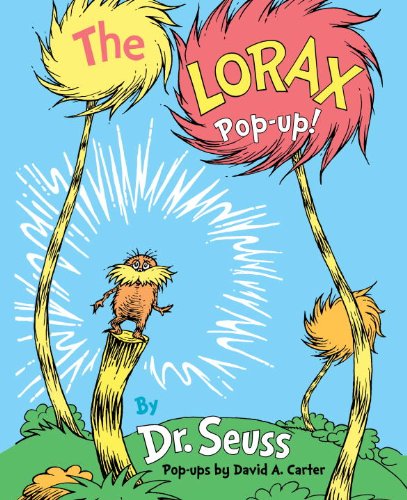 “David A. Carter adds to Seuss’s world-building by taking the author/illustrator’s ’tude and giving it the added dimension of 3-D. And Carter has surpassed himself here. Second only to the museum quality paper engineering he created in One Red Dot and Blue 2, The Lorax Pop-Up! is filled with magnificent pop-ups . . .”

Having just seen the adorable soon-to-be blockbuster film version of Dr. Seuss’s The Lorax (on opening day, no less!), I was not sure if a pop-up book could add to the legacy of the 1971 book of the same name.

As you probably are already aware, Seuss’s Lorax story was ahead of its time in presaging the destruction of the rainforests. It is also a thinly veiled expose of the nastier side of capitalism geared toward plowing down everything natural in the universe to make things that people can buy—things of questionable value or necessity. The story opens:

“At the far end of town
where the Grickle-grass grows
and the wind smells slow-and-sour when it blows
and no birds ever sing excepting old crows . . .”

In the film The Lorax, the contrast of this desolate place “at the end of town” is highlighted by showing the present as a place of manufactured, plastic beauty in which all the trees, though colorful and well lit, are fake—poor facsimiles of the real thing. (Sort of like the world aboard the cruise ship in the movie WALL-E: a sterile, fauxly merry, overly programmed environment where no one thinks for him- or herself, capitalistic overindulgence has been taken to the extremes, and the only sustenance offered is super sizes of unhealthful fast-food.)

Once the story establishes where we are, it’s up to the Once-ler, the narrator, who now lives in isolation and secrecy, to explain to us how this overly bright existence came to be. But he won’t give it up easily:

“You won’t see the Once-ler.
Don’t knock on his door.
He stays in his Lerkim on top of his store. . . .
And on special dank midnights in August,
he peeks
out of the shutters
and sometimes he speaks
and tells how the Lorax was lifted away.
He’ll tell you perhaps . . .
if you’re willing to pay.”

Why does the Once-ler hide? Because he is responsible for the disappearance of all the real, living trees. And like we find in all great, partisan battles between good and evil, there is the underdog in this story who stands up for the underrepresented, who fights for the good. This crusader, the Lorax, “who speaks for the trees” is a curmudgeonly creature described best by Seuss:

“He was shortish. And oldish.
And brownish. And mossy.
And he spoke with a voice
that was sharpish and bossy.”

In the course of the story we learn how the Once-ler’s butchering of one small Truffula tuft to knit one multi-useful Thneed dominoed out of control to result in the destruction of not only all the Truffula trees and their fruits, but also of a community of Ooompa Loompa-ish “Bar-ba-loots” who depend on the fruits for their sustenance.

In short, The Lorax—movie and book alike—are children’s morality tales no more subtle than an Aesop fable. And yet, why are they both so delightful? Most likely because Seuss managed to disguise the rather heavy message in such whimsical prose, using such fanciful names and illustrating them with such silly images that we got caught up in his world of fantasy and took our medicine without realizing it was medicine.

In that vein, David A. Carter adds to Seuss’s world-building by taking the author/illustrator’s ’tude and giving it the added dimension of 3-D. And Carter has surpassed himself here. Second only to the museum quality paper engineering he created in One Red Dot and Blue 2, The Lorax Pop-Up! is filled with magnificent pop-ups, gatefold panels with moving pops underneath, pull-tabs, a wheel-reveal, and all sorts of other squiggly, wiggly, pointy, swirly whirly thingies—all made of paper.

And the paper! The matte stock, while thicker than the pages of a typical Seuss reader, actually makes this book feel like an original Seuss hardcover—no mistake, I am sure, gauging by the quality of the printing and the seamless matching art created by Jason Zamajtuk to fill in the gaps.

in the end, there’s something for everyone in The Lorax Pop-Up! Toddlers will love the paper mechanics. Preschoolers will adore the fanciful rhyming of the text and the inscrutable nature of the illustrations. Adult readers will enjoy sharing all the above with them while nodding their heads wisely to themselves. Artists will admire the production values. And environmentalists will rejoice in their cause being brought to 3-D life in paper and on film.