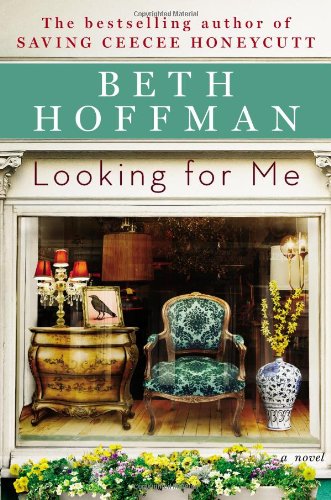 Life takes a sharp turn for Teddi Overman when her mother dies.

Though semi-estranged for many years, the women were tied together as the last tattered remains of a family that began to disintegrate years before. They’d butted heads when the stubborn daughter left home to pursue her dream of antiques restoration, beginning a long decline, including the disappearance of Teddi’s younger brother, the death of her father, and Teddi’s grandmother choosing to live with Teddi instead of her own daughter.

Now a successful business owner in Charleston, SC, Teddi now must balance clearing out the detritus of her family’s life in Kentucky with the demands of running her shop, including dealing with quirky customers and pigheaded employees.

When she begins to suspect that her brother might not be dead, holding on is not easy.

In Looking for Me, Beth Hoffman creates wonderful, well-fleshed–out characters. Though not all likeable, especially Teddi’s mother, they are all believable. Ms. Hoffman does a fine job of bringing them to life both by evocative description and giving each character unique patterns of speech and tone as they speak.

The author is also apt at giving her characters real-life motivation and believable back stories. She helps the reader to remember there are no angels or devils among humans; there are only people coping with life’s challenges in the best way they know. The first half of her story meanders a bit between past and present, but the characters are so compelling it’s a walk worth taking.

That makes the second half of the novel especially disappointing. The wonderful characters are still there, but it becomes confusing and then frustrating waiting for Ms. Hoffman to do something with them.

Quirky co-workers and customers are introduced, but they don’t advance the story all that much. Teddi’s journey to success is detailed, but without reference to how it applies to a narrative thread. Her business is endangered . . . for a minute. Then a series of deus ex machinas gets rid of that conflict.

In the last 50 pages of the book, a weak “mystery” and an even weaker “romance” are introduced—but it’s too little, too late.

The tradition of modern Southern storytellers such as Fannie Flagg and Jan Karon make it make it a given that unusual characters will abound, tales proceed at a languid pace, and family shines centrally. Ms. Hoffman tics off each of these from the list. Unfortunately, what is missed is a compelling narrative storyline making the trip worthwhile in the first place.