Look Behind You: A Novel (Kendra Michaels) 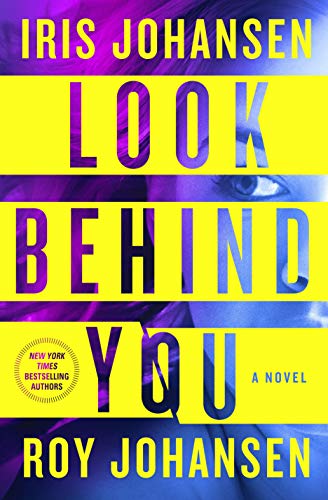 “This fifth entry in the suspense series by the Johansen mother-and-son team is definitely one to encourage the reader to become a Kendra Michaels fan.”

Since an experimental surgery gave Kendra Michael sight, she has been an invaluable asset to the CIA and FBI because of her observational skills. Kendra doesn’t like what she does, but she feels it’s something she has to do.

“‘This investigative stuff isn’t fun for me.  But there are so many monsters out there. If I can keep one of them from taking one more life, it’s worth it to me.’”

Balancing her work as a music therapist for the traumatically disengaged with her criminal investigations, she’s now called in for another bizarre case. The killer calls himself  “Zachary” and that’s all they know, other than that he leaves odd objects with the bodies of his victims.

“. . . her eyes kept going back to the random objects planted with each corpse.
Keys. Bowling ring. Bolo tie. Pocket watch. Visor.
She leaned closer, murmuring under her breath, ‘What are you saying to us . . . ?’”

Joining a “dream team” of crack investigators, Kendra soon recognizes something from a crime scene committed years before in another city.

The words were scrawled on a sheet of paper found inches from one of the victims. Shots from other crime scenes showed the same message at each one. It would be tough to reproduce the message with such precision unless it was the same person.”

That breakthrough is all the team needs. Soon it’s discovered that items associated with deaths from various parts of the country are being left with current victims. The message is obvious: the killer of all these people is one and the same, and he’s gahering himself for a final coup.

“Kendra’s breath left her as she spin around and took in the images from the dozen bulletin boards.
More cities. More victims. More horror.
‘My God . . . These are all . . . him?’”

Abruptly, the once-blind investigator finds herself Zachary’s target, and those she loves in danger. When Kendra’s best friend is threatened, and Agent Lynch, the love interest she’s held at arm’s-length for much too long, is critically injured, it’s a race to see which will come first: the discovery of the killer’s identity or her own death.

“The screen read: LOOK BEHIND YOU.
She spun around. Kendra no longer felt fear; pure rage course through her veins. She gripped her phone and began to type.
WATCH YOUR BACK, ZACHARY. I’M COMING FOR YOU.”

This is definitely a suspenseful tale, the kind demanding a nonstop read once it’s begun. Having two characters, Kendra and her friend Olivia, one blind and the other now sighted, comparing the way they observe life against that of the average person who’s never been deprived of any senses, gives the story an added edge, especially when Olivia is threatened by Zachary.

Kendra’s reluctant attraction to Lynch is a downplayed element throughout, even as he risks death to protect her and help her find the killer. Her love for him is always evident however.

Even those who can generally guess the outcome halfway through a novel, will be stumped by this one. There are definite twists and turns throwing the reader off course, and the most surprising twist isn’t the identity of the killer but the reason for the many deaths.

This fifth entry in the suspense series by the Johansen mother-and-son team is definitely one to encourage the reader to become a Kendra Michaels fan.