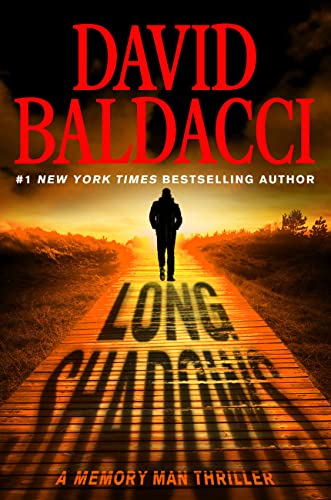 “Fans of Baldacci’s ‘memory man’ character will be highly satisfied with Long Shadows and anxiously await the next installment in the series.”

Amos Decker is a memory man. Literally. As the result of a football injury many years previous, he developed hyperthymesia (total recall of every moment of his life) and synesthesia, “which caused him to pair certain things with unlikely colors. In this case it was dead bodies linked with a shade of electric blue.” Two activities he would like to live without. “His hyperthymesia was an amazing tool for a detective, but it was also overwhelming at times.” This event would be both.

Decker is an FBI consultant who frequently works outside of FBI regulations, but the case solve rate for him is 100%.

As David Baldacci opens Long Shadows, Amos is suffering from insomnia, and when he gets a call in the wee hours of the morning, he knows it can’t be good. And it isn’t.

His ex-partner, Mary Lancaster, is calling for comfort. Her dementia is increasing but she has enough recall to know what is happening. Today she does not know who her daughter is, or even that she has a daughter, and that is distressing. Decker knows where this conversation is going and before he can do anything, Mary kills herself.

It seems that all of the people who had been near to him are gone, one way or the other. “And Amos Decker wasn’t sure he cared anymore.”

As he tries to pull himself together, Decker gets a text from the Washington Field Office directing him to come to Washington at once. Here he is introduced to his new partner, an African American woman, Special Agent Frederica White. Decker is not pleased, he does not want a new partner, but has no choice.

Decker and White are sent to Florida where they are assigned to investigate the murders of a Federal judge, Julia Cummins and her private bodyguard, Alan Draymont, employed by Gamma Protection Services. Decker’s first thought, why a private bodyguard and not one assigned by the Fed? A thought to tick away in his always active memory.

Baldacci clearly knows his stuff as he moves the story along at a quick pace. Draymont was shot, the judge was butchered with a knife. Why two different means of attack? Decker immediately believes there were two different murderers, but how likely is that?

Enter FBI Special Agent Doug Andrews of the Fort Myers RA. Another question tickles Decker’s mind: Why send two agents to investigate when there is a perfectly good FBI office in this jurisdiction? Decker is not happy, Andrews is not happy, and White is caught in the middle.

Baldacci sets up a series of situations where things are not what they seem and not what they should be, and family and neighborhood secrets begin to rise to the top.

Of course, the first persons questioned are the judge’s son Tyler, and her ex-husband, Barry Davidson, both of whom alibi each other. Tyler, in high school, is looking to move to college on a football scholarship. Barry is a drunk who claims he is still in love with his ex.

The neighbors are interviewed, notes are taken, and more questions arise. The neighbor, Doris Kline, was Julia’s good friend and they shared a lot, but nothing that immediately rose to the top. The neighbors on the other side, Maya and Trevor Perlman, were out of town when the crime occurred. Do either of her neighbors know more than they are sharing? The gated community is small and intimate, as Decker soon discovers, as stories become more involved and secrets begin to surface.

When Decker and White visit Gamma Protection Services, they meet a brick wall in the person of Kasimira Roe, the CEO of Gamma. Roe inherited the million-dollar company from her father, Kanak, when he mysteriously disappeared in a boating incident three years earlier. As Decker probes for information, Roe is uncooperative but one of her employees, Alice Lancer, offers to give some information on Draymont. At the moment Lancer arrives, she collapses and is taken to the hospital before she can speak to Decker and White.

Here Baldacci ramps up the tension when two men appear, and Lancer mysteriously disappears from the hospital.

As Decker and White now begin the search for Lancer, Baldacci throws another situation in their path. Roe wants to hire Decker to discover what happened to her father. His boat and his body were never found—not a trace. Decker agrees only if this situation is linked to the crime they are working on.

Now Baldacci has the reader going down two paths and it soon becomes apparent that there is a link, and the parallel lines are beginning to shift closer to each other.

New characters continue to surface. Patty Kelly, Judge Cummins’ personal secretary, has now mysteriously disappeared and the mystery deepens. “She [White] said, ‘So, we got Lancer and Kelly missing. Draymont and Cummins dead. Ex with an alibi.’”

Not to be forgotten is Decker’s promise to help Kasimiri Roe learn the truth about her father’s disappearance provided there is a connection to this case, and Decker’s perfect memory recovers some curious issues. When Draymont was murdered, a wad of foreign currency was stuffed in his throat—old Slovakian currency. Kasimiri Roe’s father, Kanak, was from Slovakia. “The foreign currency in Draymont’s mouth seemed to connect with Kanak Roe, or at least the Roe family.”

Baldacci’s maze continues to flourish, “We’ve got a hodgepodge of clues, all pointing in different directions, one guy under arrest, another guy who might have done it. But with both of them the clues add up one way, but not all the way.” And he throws in blackmail,  an illegitimate birth, and employment woes for Decker and White, just to keep the reader turning the pages.

More deaths follow as the two cases eventually merge. Baldacci is to be congratulated on how he sets up the story, creates three-dimensional characters, and layers seemingly unrelated situations one on top of the other until the resolution becomes startlingly clear.

Fans of Baldacci’s “memory man” character will be highly satisfied with Long Shadows and anxiously await the next installment in the series.