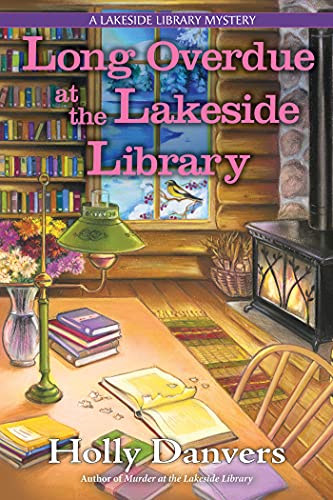 “Danvers’ writing is good; she brings the reader right into the story through her description and use of tension.”

Holly Danvers has set her new cozy mystery in the Northwoods of Wisconsin during the winter. One only has to have experienced winter in the northern Midwest to recognize how spot on she is with her descriptions.

Her heroine, Rain Wilmot, operates a library set up in an old log cabin in Lofty Pines. The story starts with Wallace Benson, a resident, coming to the library looking for a cookbook with chili recipes. He is preparing for the annual ice fishing festival that will have a chili contest where all the entries will ultimately be placed in one pot and shared with the contestants. There is a substantial award for the winner, and Wallace plans to be that person.

Unfortunately, as the festival gets underway, Wallace winds up murdered, and the primary suspect is Nick, the husband of Rain’s best friend, Julia. And Julia’s brother, Jace, is one of the town’s police officers, so he cannot participate in the investigation because of that relationship. That leaves the job to Rain and Julia.

Danvers sets the murder very early in the story, which is excellent for a cozy. And she builds in a question of side romance between two contenders for Rain’s affections, building tension well.

Through their investigation they uncover several suspects who had various motives for doing in Wallace—his wife, Tina; an angry ex-coworker, Danny; and Seth, a good friend of Nick and Jace’s. Julia is desperate to find someone other than her husband as the guilty party, and they focus their attention on these possible candidates.

Danvers develops her main characters well—Rain as the logical one, Julia as the desperate wife, Jace as the protective brother. Her minor characters are developed well as secondaries—Marge, the friend and senior citizen; Kim, Seth’s wife. Most of her characters are three dimensional and believable.

The only character underdeveloped is the police officer assigned to the case, Officer Bentley. He’s new to the force and ambitious so Danvers had a lot to work with, but she only has him in two scenes and there is little or no investigation on his part. He just appears as a convenient foe for Jace. Danvers missed a bet in developing more tension as Bentley could replace Jace as a new leader on the force.

Danvers casts a number of clues about that help Rain and Julia investigate, and with Jace off the search, he is also able to help them by supplying information on the status of the investigation that he gets from his police buddies. The reader will jump from one suspect to another while trying to pick the real culprit.

An attempted murder of one of the characters as well as on Rain adds to the tension and keeps the reader guessing as to whom the real murderer is and as Rain and Julia close in, Danvers does a good job of filling the requisite climactic scene with action and tension.

Danvers’ writing is good; she brings the reader right into the story through her description and use of tension. The story unfolds logically from step to step as the ladies pursue their suspects and count them out or count them in, accordingly.

Long Overdue at the Lakeside Library is a good read. And Danvers ends the story with a cliff hanger in Rain’s love life, leading the reader to expect another in the series that will explore that issue.