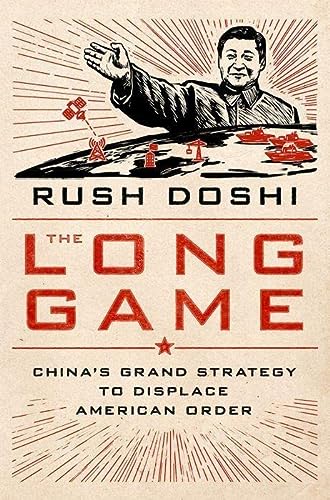 “provides a comprehensive history and analysis of China's long-term grand strategy to move beyond becoming merely a regional power in Asia to displacing the United States as the world's premier military and diplomatic power . . .”

An increasingly hostile and assertive China poses the most serious challenge America has ever faced to its long-term security and to the enduring global order established after World War II. In this timely book, author Rush Doshi provides a comprehensive history and analysis of China's long-term grand strategy to move beyond becoming merely a regional power in Asia to displacing the United States as the world's premier military and diplomatic power, upending the established economic and political institutions of global governance to meet their nationalistic purposes.

The impact and value of the author’s analysis comes from the extensive use of Chinese primary sources, particularly speeches by Chinese Communist Party (CCP) top leadership, foreign policy speeches, official documents, and government-controlled media and think tank publications. Expertly interweaving these together with a long-term analysis of Chinese decision-making on topics such as military doctrine, defense spending, and Chinese actions on the world stage, Doshi provides a holistic and deeply concerning picture of a totalitarian state seeking global hegemony.

The Chinese version of grand strategy delineated in the analysis has been patient, persistent, and relentless, combining all the elements of statecraft—diplomacy, information, military, and economic—the so-called DIME model of strategy. Beginning with the early opening of China to the west in 1979, the author breaks down the sequence of Chinese grand strategy into three basic phases: blunting, building, and expansion, and then shows how each element of the DIME model was conducted during that phase as well as the continuity of strategy across changes in top CCP leadership, with each succeeding General Secretary building on the efforts of his predecessor.

In particular, the Chinese reaction to the fall of the Soviet Union, the end of the Cold War, American military actions in Iraq, Kosovo, and Afghanistan, and the global economic crisis of 2008 were major influences on the Chinese government’s viewpoint of the relative power of China and the US, driving their decision-making to a much greater extent than most Western readers understand.

In the past decade, Chinese efforts to displace the US on the world economic stage has only accelerated, with the Belt and Road Initiative and the growing effort to displace the US dollar as the world’s reserve currency, creating both economic and diplomatic inroads throughout Asia, the Middle East, Africa, and even Latin America. The challenges faced by the world’s economy from the COVID crisis of 2020 has only increased Chinese economic efforts to take advantage of the situation to strive for dominance in the crucial high-tech industrial race of the 21st century: quantum computing, artificial intelligence, biotechnology, and robotics.

The most concerning factor has been the development in last decade of a more modern and lethal military force, particularly the Chinese navy, which has moved from a force designed to keep the US Navy out of the Western Pacific and the approaches to China to a burgeoning global maritime force capable of projecting forward presence and sea power to defend a growing Chinese economic and diplomatic presence in the Middle East and Africa. The development of large amphibious ships, at-sea replenishment ships, multi-warfare capable surface ships, and the beginning of an aircraft carrier fleets, show the Chinese are determined to dominate not only the East and South China Seas, contentious zones with waters and potential resources claimed by multiple countries along their littorals, but protect Chinese interests on a global scale.

As the CCP moves toward its goal of global hegemony by 2049, the 100th anniversary of the Communist conquest of China, the author also provides some recommendations the US and its allies can take to temper Chinese soft power and overt aggression. In spite of its massive development and military power, China faces a number of social and economic structural problems, and the demise of the US and the west has been forecasted before, most prominently in the late 1970s in the wake of Vietnam and Watergate when the Soviet Union seemed on the march to global dominance.

However, as the author concludes, the will and determination to solidly face the Chinese threat has not yet solidified in the halls of power in the west, which is still emerging from a deep COVID slumber. Solid research and sharp analysis from books like this are sorely needed to truly understand the challenges faced by the liberal and capitalist democracies of the west in the dangerous decades ahead.