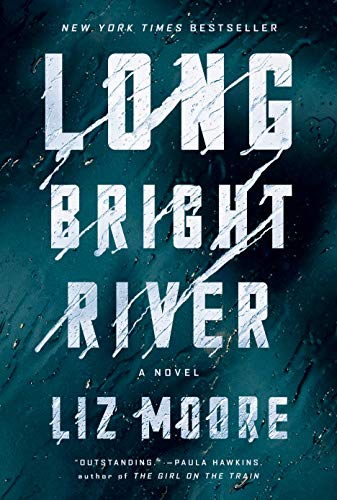 “Told with the voice of a literary master at the top of her craft, the pace may be too slow for thriller readers, but for those who love a strong literary voice in their genre fiction or the voice of a crime writer in their literary fiction, this novel is a home run.”

Liz Moore begins Long Bright River with the death of a nameless woman.

That single corpse symbolizes much at the heart of the novel. Addicts—and their loved ones—colliding with the expanding opioid crisis. Addicts, who die alone, abandoned in vacant lots and empty buildings—shuttered squats of vagrants repurposed into mausoleums.

The public and the personal intertwine in this meticulously detailed novel to tell the bigger story. The larger issues of crime and violence that a community faces combined with the small but tragic deaths of individuals.

The protagonist, Mickey Fitzpatrick, is a single, female, thirtysomething patrol officer in Philadelphia. She sees the impacts of the crisis through overdoses, constant illegal behavior, and the struggles of the people she has sworn to protect.

“Thirteen years ago, when I first started, it happened a few times a year: we’d get a report that someone had fatally overdosed, had been deceased so long that medical intervention was unnecessary.”

Not anymore. Now the reports roll in every week, and with it her fear that one day the anonymous woman will be someone Mickey loves.

Her beat is not a pretty part of the city. Kensington is filled with abandoned buildings, drug dealers, sex workers and the people who make their living off their suffering. But it’s also home to people who need Mickey’s help, whether they want it or not. Mickey learns this firsthand with the resurrection of an overdose victim.

“This was the secret I learned that day: none of them want to be saved. They all want to sink backward toward the earth again, to be swallowed by the ground, to keep sleeping. There is hatred on their faces when they are roused from the dead.”

Driven by personal demons, including a sister with a drug addiction, who supports her habit by walking the streets, Mickey finds herself confronted over and over with the worst examples of human behavior.

But she’s trying to build a better life for her and her son. That means working hard at the only job she understands. Her work as a patrol officer comes with its own complications as she navigates the old boy network of the Philadelphia Police Department.

Her belief a killer is targeting sex workers isolates her even further from the community of those who wear a badge. Her inability to connect with people, fueled by anxiety and the constant reminder of her gender in a male-dominated world, is a painful experience to fathom.

Other than an old partner, currently out of commission from an injury, Mickey has no one she trusts in her own department. “The thought of telling Sergeant Ahearn anything about my personal life makes me stubborn.”

That isolation drives Mickey to make bad choices and become more and more alone in her investigations, though Moore sprinkles the chapters with hints that Mickey can overcome her prickly and isolationist attitude.

Throughout the novel, Moore reveals the complex threads of Mickey’s backstory. It’s not until the final pages that readers can fully grasp a complete picture of her life, her relationships with her family and the father of her child.

“The first time I found my sister dead, she was sixteen. It was the summer of 2002.” Readers discover this startling line in one of the sections Moore labels “then.”

Alternating between “then” and “now,” Moore provides a structure to the story that encompasses an entire lifetime of challenges, each of which leads Mickey to her current situation.

After the event of finding her sister dead, Mickey spends the next 400 pages living a poignant, finely drawn illustration of familial responsibility, the ravages of drug addiction, and the long-term effects of abuse and neglect.

Told with the voice of a literary master at the top of her craft, the pace may be too slow for thriller readers, but for those who love a strong literary voice in their genre fiction or the voice of a crime writer in their literary fiction, this novel is a home run.