A Long Day in Lychford (Witches of Lychford) 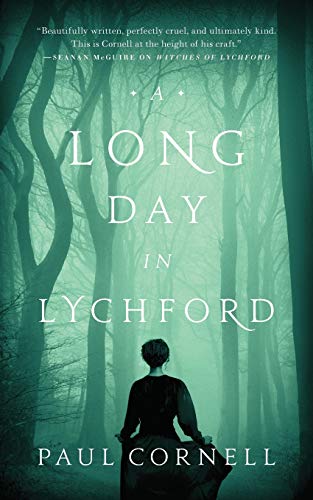 “a lovely installment, if a brief one, filled with amusing events, and a slowly mounting sense of dread . . .”

The market town of Lychford in the Cotswolds is truly unique in that it has three resident witches and is visited  by supernatural folk, though the other inhabitants may not always be aware of this latter fact.

“Real magic isn’t like that of Harry Potter. Everyone had different names for the beings from worlds bordered on their own, and the degree to which those other beings understood humans depended on how much they’d interacted.”

On this particular day, Autumn Blunstone, owner of the magic shop, Witches, awakens to a dilemma and soon learns she and Old Rory Holt had a bit of a row at the pub and now Rory’s disappeared.

Things gets worse as the Reverend Lizzie Blackmore is visited by Finn, Prince of the Fairies. As Finn explains: “‘Something strange is happening to the borders. Leaving fairy and getting into Lychford is normally just taking a step here and there, but this time, it was like stumbling down a hill. I felt like I’d crash any moment. I’ve been sent by my father with urgent diplomatic condemnation.’”

Bad to worse: an entire barn filled with people, a rave, has also disappeared, though their music lingers on, and the dance music is keeping the fairies awake.

“‘Old Rory was caught in a backlash and sent flying . . . that’s probably what happened to the lorry driver, and it might be what happened to the people at the dance. It’s why the Prince had so much trouble getting here.  You’ve messed up the borders around Lychford. Now every dark thing that’s out there will be heading here.’”

Autumn has to undo what she’s done, and as soon as possible, for the magic is collapsing, and when it vanishes, everyone caught within it will vanish, also.

This story is very definitely a “day in the life of . . . ” but isn’t quite lengthy enough for justifying the use of the word “long” in the title. While it has an intriguing premise, this novella seems more like an episode that should be inserted into a longer story.

The reader gets the sense she should already know the various characters so there’s very little introduction of them. One would truly like to know more about Prince Finn and his association with Autumn, causing him to refer to her vaguely as “the other one,” of Judith’s relationship to Autumn, and how the Reverend Lizzie discovered her “witchly” talents. All these questions and others are undoubtedly answered in the first two stories, so this, the final one, offers no information for the uninitiated.

It’s a lovely installment, however, if a brief one, filled with amusing events, and a slowly mounting sense of dread as the magic knot of Autumn’s spell slowly unravels. The descriptions of the magical beings Autumn encounters and the reaction of those affected is entertaining and thankfully nonviolent. Unfortunately, it needs more explanation to truly catch and hold the imagination. Because of that, it seems the best recommendation is to read the three stories in order to fully enjoy them.