The Lonely War: One Woman’s Account of the Struggle for Modern Iran 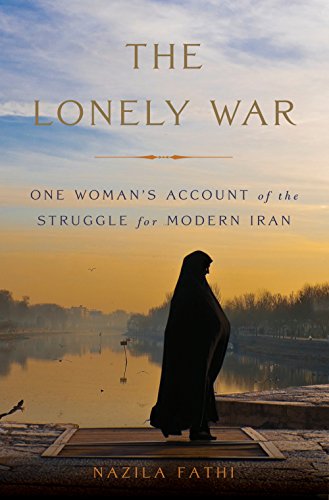 Nazila Fathi is a woman of courage. She is also a very good writer. Both of those traits are evident in her compelling tale of growing up in Iran and then working as a journalist there for two decades as the political landscape changed rapidly and became ever more perilous.

Fathi was nine years old in 1979, the child of an educated and affluent family, when the Iranian revolution that deposed the Shah took place. That revolution transformed Iran, removing personal liberties while creating a new middle class comprised mainly of poor and uneducated supporters of the new regime.

Seizing jobs, housing, and positions of power, this new middle class changed the status quo in unprecedented ways. In time, they helped build another movement that was aimed at regaining personal freedom and finding a place for their country in a modern world.

As a child, Fathi watched the events shaping her country. As a journalist, she bore witness to them.

The Lonely War shares, among other things, how the war with Iraq in the 1980s helped Ayatollah Khomeini rally the nation in the face of their enemy, how the new regime appealed to the lower classes through the lens of Islamic fundamentalism, how technology drove political and social change in Iran, and why the 2009 uprising signaled the existence of a large Iranian reform movement.

Some readers will remember past events Fathi writes about as she offers a clear historical account. Others will clearly recall more recent events, including the death in 2009 of Neda Aghasoltan, the 27-year-old woman whose face became iconic after she was gunned down on the streets of Tehran as she protested in solidarity with others.

Fathi, who witnessed Neda’s death, captures the tragedy movingly. “Aghasoltan had come out to protest in solidarity with other Iranians,” she writes, “but she hadn’t voted and wasn’t interested in politics—even though politics has shrouded her entire life and had turned her into something of a rebel despite herself. She loved dancing and singing, but before she was born, the regime had banned women from taking part in such things, so all her adult life, like many women of her generation, Aghasoltan had defied the rules.”

In July 2009, a month after the protests against what many saw as Mahmoud Ahmadinejad’s stolen election, Fathi left her apartment for a meeting. She had frequently defied the ban on covering protests foisted upon all journalists working for foreign media but the risk had increased. Outside her apartment she realized she was being chased by government forces. Shortly afterward, she learned that her photo had been given to snipers. That was when she and her husband took their two young children into exile.

Fathi says that “history has many narrators.” Her story, she says, “is that of a girl who grew up after the revolution, became a journalist, and witnessed the metamorphosis of the society around her.”

In blending her personal story with the political story of Iran, Fathi helps readers gain a better understanding of the forces and figures that have impacted those stories. Peopled by numerous characters and containing myriad events, the timeline and players can require concentration and repeated readings, but Fathi offers a masterful telling of her country’s modern history. In doing so, she gives us an engaging narrative at the center of which is a bright, feisty woman who is compelled to explore events and experiences that impact her and her country. That compulsion provides us with a vivid rendering of a country that has survived years of turmoil and trauma. It is a country that may yet find its way to a seat at the table of world nations.

As Fathi concludes, “The regime is still an autocracy, to be sure, but democracy has been spreading at the grassroots level . . . The desire for moderation goes beyond a special class. . . . Civil society . . . has turned into a dynamic force. . . . The revolution is evolving and Iran’s story is still playing itself out—as is my own.”