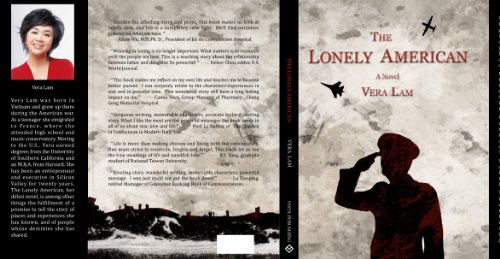 Vera Lam beings her debut novel with this quote, a powerful story of love, war, missed chances, family, and forgiveness.

The story follows the journey of a group of civilians and soldiers, Americans and Vietnamese all swept into the maelstrom of the Vietnam War and its aftermath.

The narrative opens in 1962 Saigon with American Air Force Lieutenant David Emerson having a chance encounter with a young Vietnamese woman, Lucie Hong—a meeting that will have profound consequences for both of their lives.

Their short but forbidden romance produces a daughter that Lucie hides from David as he completes his first tour in Vietnam. When David returns to Vietnam in 1967 for another tour, Lucie has married, moved on with her life, leaving David, who is committed within his own satisfactory but stale marriage, wondering what might have been.

The story then unfolds as David, Lucie, and their daughter Emma continue their shared destiny, and David tries to develop a relationship with his daughter. The remainder of the story is devoted to their halting and rocky reconciliation. In addition, David has to come to terms with the very real suffering and death he may have caused as a pilot in Vietnam, facing the carnage of war not seen from 10,000 feet in the air.

Lam does a marvelous job in developing the Vietnam setting as almost a secondary character in the book, giving the reader a real sense of how the city of Saigon changes from the opening scenes in 1962, when Vietnam was still a faraway place to many Americans, to the crowded city and slums affected by the influx of nearly 500,000 GIs with all of their virtues and vices by 1967.

Her descriptions of the details of life for Saigon city dwellers and average Vietnamese civilians trying to simply live their lives in the middle of a seemingly endless war are also very well done and offer an interesting historical viewpoint.

Lam provides a lot of emotional insight as Emma grows up as a teenager exiled from Vietnam after the fall to the Communists in 1975 and begins her eventual journey to American citizenship and life in California. She also offers some revealing insight into Emerson’s journey from idealistic young officer to a seasoned warrior coming to terms with his role in killing both soldiers and civilians.

Although the plot takes almost 70 pages to really develop and begin building the conflict within each protagonist’s journey, by the end of book Lam manages to provide plenty of emotion and sympathy to her characters.

For a debut novel, The Lonely American does a decent job of moving the plot along, although there never seems to be any real menace to the main characters from the war swirling around them. The introductory plot device in chapter 1 also seemed a bit contrived to jumpstart the story and draw in the reader, although the ultimate outcome of that initial tragedy does offer a bit of a pleasant surprise.

In addition, the author does manage to actually provide a bit of a plot twist at the end that certainly surprises and provides a means to bring the book back around to the beginning, those innocent days of 1962 before 50,000 Americans and millions of Vietnamese died in 10 years of bitter war.

Although a bit slow to develop and a bit formulaic at times, The Lonely American is nonetheless a solid debut novel that certainly showcases the unique perspective of the author and her desire to tell the story of people she encountered during her travel from Vietnam to America.