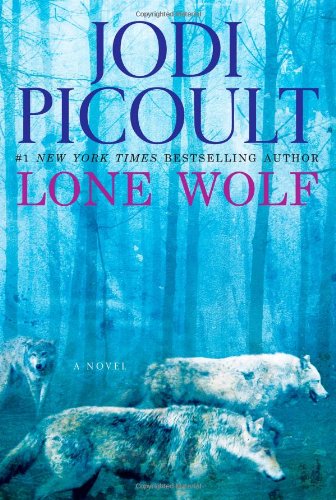 “Lone Wolf is an emotionally impactful story dealing with familial differences, love, redemption, and forgiveness. Each character gets a chance to further the story from his or her point of view in the different chapters that author Jodi Picoult impressively interconnects. Another informative and compelling book from Ms. Picoult.”

Seventeen-year-old Cara Warren is in the hospital recovering from a horrific car accident that put her father, Luke, in intensive care. Cara lays in her bed, doped up on morphine from her injuries, her mind tormented—for she blames herself for the crash.

Cara’s mom, Georgie, now remarried and the mother of young twins, rushes to her daughter’s side. She is agonized by Cara’s condition and the seeming inevitability of her ex-husband’s death and remains by Cara’s bedside. She phones her son, 24-year-old Edward, who left their New Hampshire homestead more than six years prior after a violent argument with Luke.

Edward has not been back or spoken to Luke since leaving home, but upon hearing the pain in his mother’s voice and the extent of his sister’s and father’s injuries, he hops on the next plane. He arrives at the hospital, stunned by his sister and her surly attitude toward him, for she blames him for their family dissolving when he left.
Edward is also shocked when he sees his father and realizes he is being kept alive by machines—something his father had vehemently objected to. Edward remembers, at age 15, before his dad departed for a two-year jaunt into the Canadian wilderness to study wolves—a passion that was also his obsession—that he had asked Edward to make sure no extraordinary measures were taken to keep him alive if the circumstances ever arose.

This proves to be the main conflict between Edward and Cara. She is a minor and therefore does not have the authority to make decisions about her father’s care, and she thinks Edward only wants him dead. Nevertheless, Edward produces the paper his father had written many years before, stating his wishes—one that Edward had witnessed.

Edward appoints a time for the machines to be disconnected and donate his father’s organs as per his directive. Cara becomes hysterical, making accusations against her brother so he gets arrested, and his rights as the health-care proxy are revoked.

Throughout the story, the family is ripped apart by lies, deceit, and long-buried grievances. But through the eyes of Luke, the father, they and the reader learn about how wild creatures live and survive—and how one man’s fixation on them can cause such misery and dissension.

Lone Wolf is an emotionally impactful story dealing with familial differences, love, redemption, and forgiveness. Each character gets a chance to further the story from his or her point of view in the different chapters that author Jodi Picoult impressively interconnects. Another informative and compelling book from Ms. Picoult.