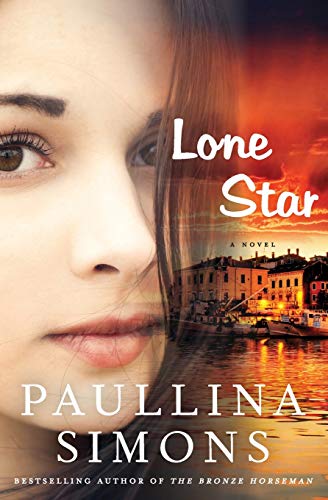 “What meaning does your finite existence have in the infinite world?”

This is a lofty question for 18-year-old Chloe Divine to ponder, perhaps beyond her understanding. Nevertheless, it is the quest posed by Chloe’s grandmother as the price for Mrs. Devine paying for her granddaughter and friends to take a once in a lifetime trip to Europe.

Paullina Simons’ newest novel, Lone Star, is the story of a trip gone horribly wrong, and horribly right, for four teenagers hailing from rural Maine. Barcelona has been a long time dream destination for Chloe and her friend Hannah. Their boyfriends, brothers, and long time neighbors of the girls decide to tag along to “experience life,” in hopes of writing a lucrative prize winning story.

Chloe’s grandmother agrees to fund them, with one caveat: the youths must visit her family in Latvia and leave flowers at a notorious World War II death camp before they can hit the Spanish beaches. Chloe is also tasked with choosing a Latvian orphan for her parents to sponsor, a replacement for the preschool-age son they lost a couple of years earlier.

The trip starts shakily, with strange food and Chloe’s stranger Latvian family. When Chloe and Hannah meet a mysterious American troubadour, things go from bad to worse for the quartet, as their strained relationship with “Johnny Rainbow” forces each of them to face the lies and omissions present in each couple and between friends.

Simons bites off a huge piece of pie with this book. Settings range from rural Maine to Eastern Europe to Italy. Characters range from 17 years of age to nearly 100. There are mysterious backstories, family grudges, drug abuse, and philosophical debates about life and love to be found in this sprawling novel. Not all aspects are handled with the same degree of aplomb.

Lone Star shines when Simons takes it into the history of Eastern Europe, particularly Latvia and Poland. By setting the story in the early 2000s, she allows her characters to have grandparents who could believably have been personally touched by the catastrophe of World War II. Her knowledge of her subject is clear; the experience her characters have at Treblinka and the history Johnny extolls to them are particularly striking and poignant. Simons does a masterful job of letting her characters tell the stories of the region without the history feeling like an info dump.

As it was in her massive hit, The Bronze Horseman, history is alive in this story. It still affects her characters sixty years after “The War,” as her Europeans term it. In fact, the book feels very European overall, from the lush descriptions to the bordering on overwrought, emotional prose. It has a Dostoyevskian tone that is unmistakably Eastern European.

If the story had been set entirely in Europe and with European characters, Simons’ style of writing would have been perfect. Unfortunately, this story is partly set in America and peopled primarily by American teens. As such, the purple prose is artificial; it doesn’t ring true to American ears. “There was no oblivion for him ever again even among strangers because all the silver strings in all the world trembled as he sang,” “his glossy unhumble filament of sound,” “It was a sacrament of wine and gold. She was so high her nose nearly bled.” All are used to describe a street performance; none sound particularly suited to the musings of a high school senior.

The dialogue is similarly overwrought: ‘“I want your life and bliss,” he [Johnny] murmurs, “your dizzying breasts reanimating my loins and lungs.” Chloe’s response: “The mystery of all the stars is in your golden mouth, Johnny. You hold the sun in your voice, a drumbeat of life in the gifts placed upon your lips. I want to engrave you on my body.” This, between a barely 19 year old and a barely 18 year old, while they are having sex. In the mouths of 40 year olds this exchange would be mildly silly; between teenagers it’s hard to swallow.

When Simons remembers her protagonists are teens, she tosses her girls into face palms and text speak; her males become surfers and launch into wrestling matches and “bro speak.” This is as unbelievable as sentences like, “No, I want ontological absolutism.” Both tactics are unfair to the interesting characters she started out with; they end up as plastic people mouthing platitudes and less than human.

Lone Star is a frustrating novel that moves the story along by fits and starts. Grandiose statements take the place of actual dialogue, and muddy subplots about Latvian orphans, teen pregnancy, and the obliviousness of the main protagonist toward what is happening around her (pregnancy, drug abuse, a prison sentence) slow the narrative considerably. Chloe starts out searching for the meaning of her existence but loses her way fairly early in the story. By the end, she seems to have decided it was love. Or lust. Or something else. Whatever it was, it was overwrought.