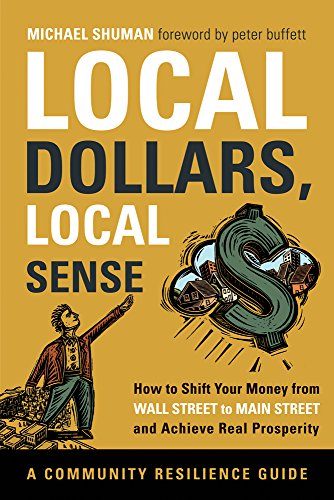 “The target audience is ambiguous, as the coverage moves back and forth between the interests of workers, activists, small business owners, investors, and public officials. While all of these interests can find useful, relevant, even inspiring ideas here, a focused treatment and actionable program for each of these groups is to be read not in this book but in a future book.”

Every large company started as a small company. Whereas large companies once sought growth via expanding their work force, lately large companies seek to reduce jobs or to move those jobs to less expensive places to do business. Policy leaders, politicians, and economists alike agree that job creation is high on the list of the country’s priorities.

To grow, businesses need capital. The massive bailouts and subsidies during the 2008–2009 capital markets crisis were entirely allocated to the very largest financial institutions, which often invest their money in any place but small businesses in local communities. The irresponsibility, miscalculations, and incompetence, verging on and sometimes embracing the criminal, conduct of large financial institutions nearly destroyed the country’s and the world’s economy.

Private equity capital is less and less available to companies that are not valued above $100 million. Big banks approve only 1 in 10 small business loan applications. Small banks approve 44%, nearly half, of small business loan applications. Yet in 2009, the peak of the financial crisis, small banks and credit unions sustained loan losses of 1.2% of their portfolios, less than half of the 2.7% loan losses sustained by big banks.

Do the above paragraphs describe an economic system that the framers of the Constitution, in articulating the rules of engagement for an economy that would promote freedom and the pursuit of happiness envisioned? Exploring the strategies to overcome the dark implications of this rhetorical question is the focus of Local Dollars, Local Sense. Subtitled How to Shift Your Money from Wall Street to Main Street and Achieve Real Prosperity, Michael Shuman’s book “is about how determined, ordinary people are exploiting exceptions, loopholes, or quirks in securities law to invest locally. It also suggests ripe areas for legal reforms that could greatly speed up local investing—and stimulate a dying economy.”

The decline of place—connected banking, involving investing locally the savings of local people, has led to the decline both of local banking and local business. Today, the economy is increasingly dominated by national/global companies, just as finance is increasingly dominated by national/global financial services enterprises.

The author argues that you would be disappointed if you expect a bank to grant a credit-worthy individual a loan. It is virtually impossible for the small business to qualify for a line of credit, for “We’ve allowed our Main Street institutions that once were the key supporters of local business to be hijacked by global gamblers.” Financial deregulation has enabled banks to deploy “federally-insured depositor money in all kinds of high-risk activities.”

Growth in a capitalistic economy requires capital. In places lacking capital, new ventures and the jobs those new ventures create will be light on the ground. The process/phenomenon is interdependent and reinforcing, for growth in one business leads to growth in another business. In the local economy, growth follows from local jobs, for, as Mr. Shuman proclaims, “Every job in a locally owned business generates two to four times as much economic-development benefit as a job in an equivalent nonlocal business.”

Among the advantages of local businesses over the nonlocal headquartered enterprise are higher environmental standards, more stable and sustainable contribution to the local economy, greater stability, and superior community planning, plus greater levels of creativity, social well-being, and political participation.

In discussing the concept of a living rate of return, at the outset of the book the author correctly attacks the duplicity of promoting improbable 8% to 12% return targets, when the historical long term investment return is in the range of 6%. He accurately points out that many return commentaries are distorted by inflation and short time horizon.

He veers off course, though, when he employs either sketchily misinformed finance theory or engages in sophistry to suggest that the concept of reinvestment, a central pillar of financial planning and wealth accumulation, should be disregarded in calculating investment returns. Unfortunately, his describing the methodology he advocates as “accurate accounting” is wrongheaded.

Extolling the virtues of local economics, he quotes long time Burlington, Vermont community economics development leader Bruce Seifer: “Local businesses reinvest their money back locally. They hire local people. They work with the schools; they mentor and train; they volunteer. They donate their charity locally. They serve on boards. When times get tough, they’re more likely to stay and not leave town.” The payoff of the philosophy of championing the local is evidenced by Burlington’s 5% September 2010 unemployment rate, far below the national average.

The author presents a host of informative, intriguing, even inspiring stories. Among the tools and strategies he explores are cooperatives, local banks, local community development initiatives, creative financing options including presell arrangements and crowd sourcing, pooling funds, local financial exchanges, and investing in oneself.

This book’s strengths are its marvelous stories, thorough investigations of local initiatives, and comprehensive cataloging of local economics programs, structures, and strategies. Financial economics sophistication applied to the larger themes of the book and the micromarkets of the financial system is not a strength of this book.

As useful as is this book’s contribution, for which the author is to be commended, readers need to be cautious in relying on certain aspects of his analyses. Further, this volume is more a tour of different financing arrangements, somewhat akin to a finance course concentrating on financial institutions rather than the financing process, for there is no effective structure for how to strategize the local business financing/investing process and how to put the tools to work.

The target audience is ambiguous, as the coverage moves back and forth between the interests of workers, activists, small business owners, investors, and public officials. While all of these interests can find useful, relevant, even inspiring ideas here, a focused treatment and actionable program for each of these groups is to be read not in this book but in a future book. That future book will hopefully include a directory of local business advocacy and financing programs and resources.