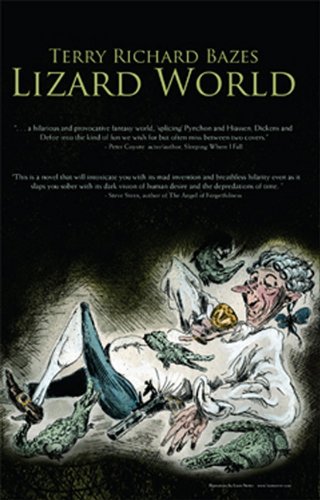 “There is much to like about Lizard World, but the book ultimately resembles the spliced creatures that inhabit its narrative: It is an uncomely hybrid less than the sum of its parts, but still strangely captivating.”

Deep in the Florida Everglades, the Frobey family—a redneck clan too dysfunctional even for Jerry Springer—harbors two terrible secrets. First, they have mastered the dark art of “splicing:” putting living tissue from one animal into another to create an unnatural new hybrid. Second, they possess the elixir of the fabled Fountain of Youth, which means that some the clan’s ancients are still kicking around in the swamps. This hardly seems like the setup for a sophisticated book, but Terry Richard Bazes’s Lizard World is just that.

Lizard World unfolds in two intermingled narratives. The first focuses on the plight of Smedlow—an unsavory New Jersey dentist who comes to the swamp in search of the elixir of youth after stealing a map from a nursing home patient. Smedlow is captured by the Frobey clan, and his post-splicing torments and transformation are narrated in grisly detail. The second narrative takes readers to 17th Century England and explores the macabre origins of the family’s dabbling in the dark arts; this narrative runs through the Frobey’s coming to America and settling in Florida.

Mr. Bazes shows a strong grounding in English history, literature, and Americana. His mastery of 17th Century dialect—the midpoint between Shakespearean and modern—is particularly skilled. He also delights in mixing high and low brow. His detailed descriptions of teeming swamp life includes many humorous and rich descriptions of predatory horse flies, pea-soup algae, and descriptions of oversized, undersexed redneck women. His self-deprecating chapter summaries draw from a fine 19th Century literary tradition and consistently amuse. My favorite: “An unlucky chapter for an editor, containing a drive through the Big Apple, a coach ride through London, some flatulence and a German Shepard.”

“They scurried now through a bewilderment of tunnels, the unfortunate Darrell Butz scrabbling on all fours ahead of him like a deranged rodent through the labyrinths of madness, pausing here and there to sniff out grubs and mouse nests, his flickering lantern exposing slumbering snakes and glimmering bottles, while Smedlow (wondering how he would ever—ever—manage to escape) lagged miserably behind, hurting his already bloody fingers and kneecaps and coughing through the dust of leaping shadows.”

At times, Mr. Bazes is too impressed with his own vocabulary. For example, in a single sentence he manages to use the words diaphanous, nevuses, midriff, and convex. The antiquarian narration, run-on sentences, and overcooked vocabulary make Lizard World a tough read. The average 400-page book reads faster than this 260-page book.

There is much to like about Lizard World, but the book ultimately resembles the spliced creatures that inhabit its narrative: It is an uncomely hybrid less than the sum of its parts, but still strangely captivating.