Living in the Crosshairs: The Untold Stories of Anti-abortion Terrorism 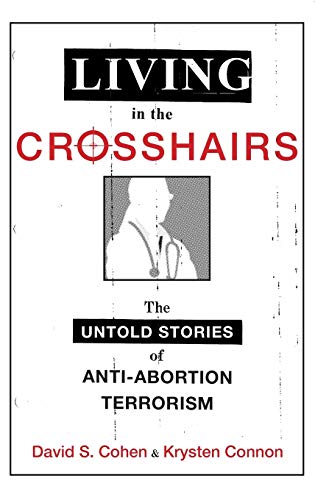 We are all guaranteed equal protection under the law, except for health care workers, administrators, and volunteers, as revealed in Living in the Crosshairs: The Untold Stories of Anti-abortion Terrorism. The book reads like an environmental piece from the ’70s when trees were spiked to prevent activists from scaling them.

Though abortion is legal in the United States and is performed for a variety of medical reasons, not merely as a “convenience,” the ability for women in America to obtain this procedure is growing increasingly limited. The zealots who continue to impose their will on women throughout the land do so in increasingly war-like methods, both in the art and actual implementation of war.

Strong stomachs are required to read this book because the anti-abortion terrorists kidnap the children of clinic workers, assault them at their homes, and have committed murder.

Cohen and Connen have crisscrossed the country to interview clinicians, administrative staffers, and volunteers whom work in the medical clinics still performing abortions. Doctors who continue to perform the procedures have to take drastic measures to remain safe, including purchasing the building in which they practice and securing additional property around their homes for protection. Amazingly, despite the professional and public shunning these clinics remain open and their staff are committed to providing service for women in need.

The first half of the book reveals techniques that both sides use in this war on reproductive rights. Chapter seven demonstrates how the legal system has failed many clinicians and is grounds for policymaking consideration.

The anti-abortion terrorism is surprisingly widespread and not just confined to the conservative states in the nation. The FBI has active cases and is participating in the monitoring and protection of health care workers throughout the country, which is important because it appears sometimes that many of the local law enforcement agencies would rather not spend the effort.

But the buck doesn’t just stop at law enforcement; nearly half of the private hospitals in the nation are owned by Catholic entities who specifically forbid abortion. This means a doctor, who may provide abortion at a private clinic, can be at risk of having his privileges removed at the Catholic hospital.

Economic blackballing by peers is another concern for anyone brave enough to provide abortion services. Chapter eight addresses legal responses to harassment and illuminates how the legal system operates and amazingly, often seems to protect the harasser.

Lawmakers, patient advocates, and clinicians may find some relief in the legal and practical reforms covered in chapter nine. All persons not wishing to treat women as biblical chattel ought to read this book.